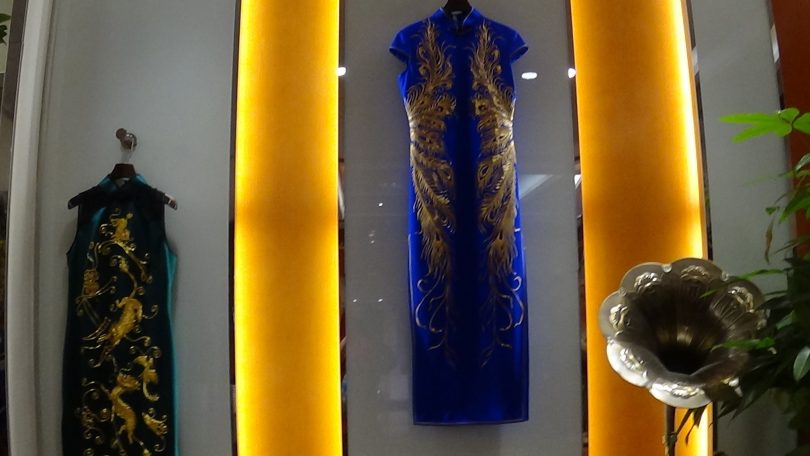 Differences in a cheongsam

The traditional Mandarin word for long dress is qipao (旗袍) or in Cantonese short dress is cheongsam (長衫).  However, there’s more to it than that!  Reflects on the definition of classical beauty–that can only be accentuated by the female body.

I’ve written extensively about the cheongsam, going back to 2011.  But never really understood its meaning for Chinese females, until I lived in China long enough to comprehend how attractive it is to the admirer and how culturally unique it has become throughout the whole of the country/world.  So much so, that every time I see a woman in a qipao, whether she is walking through the streets of Shanghai, Nanjing, Beijing, Hong Kong, Chengdu and New York or she’s an airline stewardess, I just have to stop and admire for a moment.  Sigh happily at this beautiful creation.

But many critiques have stated that, there isn’t really a difference.  The cheongsam with its Chun-li (春丽) method comes with something worn during yesteryear by Lady Song Mei-ling (宋美齡).  The truth is, what she wore was more in a Beijingner classic A line for a Jingpai fit (京派); therefore, to do a contrast against Shanghai and reflect more on Chinese conservatism.  Something which only a lady can wear in the Chinese symbolic colors of red, yellow, purple and gold.

The qipao from Shanghai came to represent a fashion-forward movement in history. Signifying the flag/banner robe which was typical until its evolution in 1911. Therefore, it changed completely in the 1920s to a hugging form or Haipai (海派- avant-garde Shanghai city style of ‘East meets West’) fit to represent more the peoples’ changing attitudes and times. Shanghai dared take the long-formal dress and make it into a shorter version; with a slit to go with the times and showcase a woman’s beauty in the anatomy of her legs.

In the past and sometimes present ceremonies, company gatherings and weddings–a male version is worn.  But it is something very much owned by females throughout the Chinese culture in contemporary times or at least for the past 100 years.

What began nearly four-centuries ago in the Manchu court of the Emperor (Qing Dynasty, 1644 – 1911), was quickly passed down culturally to the Han people of China. From Manchu females who wore the ‘changpao’ (长袍) or long one-piece gown/garment.  Gorgeously making something that was always in fashion and honestly, making it into graceful sexiness.  This sexy outfit is daring, but never cheap. Permanently stylish, but never out of style.  Beautifully elegant and formal…  Too good to be casual and it sets the right tone or mood when a female walks down the street or works in an office.  Great for work in a corporation or going out on dinner dates.  Here’s when, all the attention is set on her!  She’s literally the heart of the party in her fashionable cheongsam.

Exotic it is indeed, like the word qipao, totally Asian!  And what are the differences in this dress between cities and provinces around China?

Thought provoking!  When a charming young lady came to me and said, “But have you done something comparing the Shanghai qipao to that of Guangzhou?”

I thought for a moment and had not really compared.  Just been somewhat of an observer, descriptive on the fashion.  On how to make and wear such soft attire.

For Hongkongers or those from the Canton area, the cheongsam was modernized into a sexy mini-dress; with traditional elements it was changed to better show-off a woman’s body.  Here in Hong Kong, the style went/goes sleeveless [to adapt to the HK heat] with a ‘pearl-drop’ shaped opening from the mandarin collar to the bust line in a ‘peak-a-boo’ form. Without showing the breasts, just a little of the cleavage to demonstrate her femininity in a proper way.

Parts to the qipao, depending on which part of China you’re from are the following and with the traditional techniques when designing the dress: Mandarin collar, pankous (floral designs on the top-knot button/buttons of the qipao – 盘扣／盤扣), sleeves, edging (more on that later), length and side slits.

The variations are either single-sided large round front or single-sided straight slanted front.  With the four concepts of edging integrated into the design: gun (滚 or literally ‘rolled’ into one piece), xiang (相/像– the look or appearance in the design), qian (嵌/前- the button/buttons in front of) and dang (当/宕条- to be in good taste or the appropriate double edge strip/closure).  It’s typically a one-piece dress and the button/buttons on the right-side are usually knotted like an over beautified-flowery knot (pankou).

When I think of the qipao, I just think and envision “my dream girl”, Maggie Cheung. Yes!  That movie, ’In the Mood for Love’, when she performed the character of Mrs. Chan.  Here, other than well acted, wore the cheongsam magnificently for the audiences and moreover, this movie has passed on to be a cult-classic for moviegoers, fashionista and admirers of true-Oriental beauty.

On the costs for a decent-looking qipao…  Nowadays, a shopper can get a cheongsam through the internet.  Prices run between 864 to 1,467 RMB in polyester and cotton choices, depending on the brands and websites.  However, if you want something long-lasting and form-fitting in silk, be prepared to spend an average of 4 to 6 thousand RMB.  Prices on this dress can go as high as 300 thousand Yuan; especially when the dress is designed for wedding ceremonies.

In the end, this is a dress that in beauty can never be beat.  Just like art, this dress is priceless.  Because it is whimsical, flirty and it’s here to stay.  Enjoy your shopping… Once you have it; own, wear and flaunt, because it is yours!