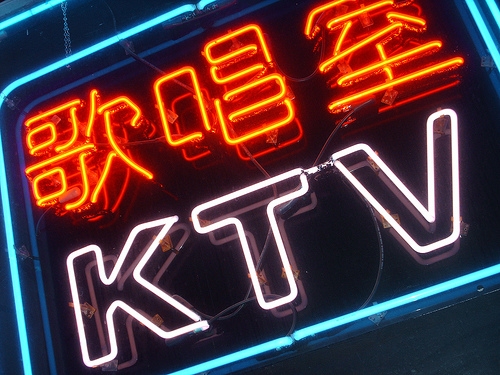 How did this fascination with KTV begin?  Something so wonderfully progressive and complex for those whom enjoy it!

It can become a night out with the girls (a hen club) to sing away to romanticism and those who wish for their dream man.  For others, it’s fun, to dance, sing and drink merrily the night away without any worries.

“There are always two sides to every coin!”, as Confucius once said.

However, KTV does have a darker side which deals with the tears of lost loves, the drunken state of rowdy customers, alcoholism, the verbal altercations and fights.

While in certain cities in China, there’s an element of KTV which caters to ‘johns’, those customers in search of an escort service can easily find prostitution and those whom are more than willing to give it in KTV.

Originally developed in the 1960s by the Japanese.

It’s called presently, karaoke.  A style in which music is played, while showing its lyrics and all the customers have to do is singalong or lip-sync to the sounds.

And what would attract a bunch of burly men to sit together and sing to those classic songs?  Aha, two elements, alcohol and beautiful women!

Karaoke took shape along Tokyo’s Ginza District.  A place for yakuza (gangsters) and businessmen to come together and do ‘real business’ under the table, while they partied the night away.  Once they had an account of prepaid services, they were ushered in to loads of beer/spirits, fruit salads or seafood and beautiful hostesses to serve it to them.

The idea took off like wildfire, since it wasn’t only to cater to the dominant male population; however, it also catered to a female side and a new-found sense of feminism/liberalism.  Specially for those coming out of the ashes of World War II.

And yes, what I possibly described above is to the darker sides of Karaoke and KTV. But they’re cleaner versions, for a patronage who just wants to go to a bar, club, pub, etc; without the hassles and just sing the night away with songs.  This kind of people are only into it to share with friends and loved ones in a good, clean way!

Whether or not you’re a KTV fan, you ought to try it once or twice.  Hey, ‘don’t knock it till you try it’, right!  It’s a part of the culture and subculture in China.

After the karaoke thing gained worldwide attention, it came to China with its economic development in the 1990s as KTV.  There was more cash flow, time and money to spare just to have fun.

Still business professionals gather and do business, but KTV is also about sharing.

It doesn’t only cater to men, but women and therefore, they also have in certain cities male hosts to serve females’ ‘appetites’.

How does it work?

Groups arrive and they have a stipend or a prepaid service around 400RMB or more.  Already once inside a cubicle, rapidly the beer, whiskey or other spirits are brought in with fruit salads or seafood cocktails.  Songs, drink and food are just flowing with an impeccable customer service, I’ve never seen before!

These services will depend on the city you’re in and prices are subject to change.

KTV is a source of entertainment for most Chinese and foreigners alike.

Once you’re into the music spirit and drink the night away, you’ll be quickly slobbering your words away to the classics.

Most popular songs on the KTV hit list for foreigners as well as Chinese are: “You’re not alone”, “My heart will go on”, “Because of you”, “Girl in the mirror”, “Lemon tree” and “Big, big world”.

OMG, then suddenly those in the group will switch to even more syrupy songs.  You know, the sentimentalist Sino-pop hits by Teresa Teng’s “Sweet Honey” or the contemporary-electric music by the Chopsticks Brothers, “My Little Apple”.

This is the grand finally to a glorious night: whether it was fun, tragic or sentimental!

For this single reason, next time I’m bored, I’ll call-up my friends and say, “I want my KTV!”