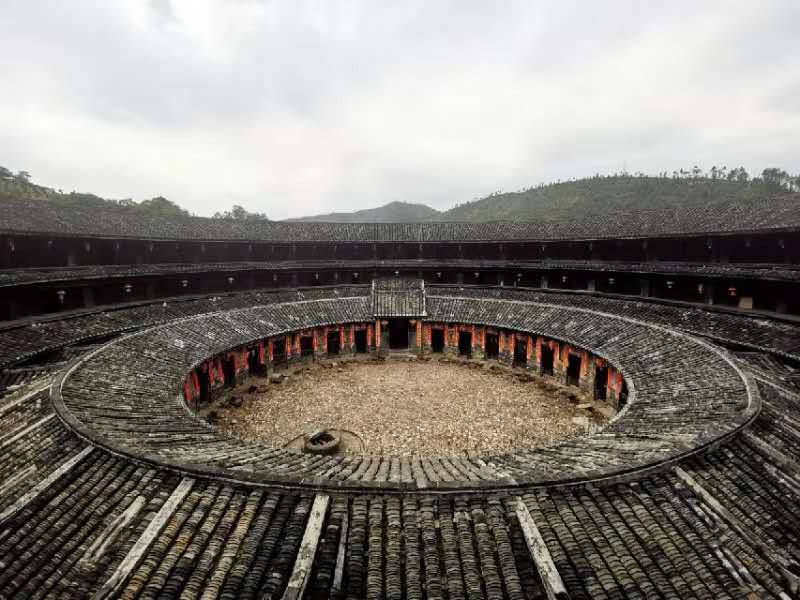 Cinci (to right, sitting) & Linda (to the right, standing) are two young students from the Silver Beach International School responsible for this collaborative article

The Hakka house, also known as the ‘Hakka dragon house’, is a famous national building in China and a wonder of the architectural world.  Almost considered as one of the eighth wonders, up there with the Terracotta Warriors.

Thousands of years ago, the Hakka ancestors once lived in this peaceful land.

A Hakka styled house, photo is a courtesy of Cinci & Linda

But from the beginning of the fourth century, they experienced five migrations from the ‘Yongjia Rebellion’ in the Western Jin dynasty (311 C.E. – Common Era) to the ‘big fight’ (Boxer Rebellion, 1899 – 1901) between the local people, invading forces and the Qing dynasty.

Photos of the Hakka homes are a courtesy of Cinci & Linda

Generations of Hakka people lived in high walls and endured countless hardships. We were also amazed about the perfect combination of the Hakka house and the environment.  It also used east-west symmetrical distribution and has the idea of “the sky is round and the land is square” (an old Chinese saying), and they chose to set up the house between the mountains and rivers.  This fully embodies the harmonious beauty of architecture and nature.

The Hakka people live peacefully.  We interviewed a 65-year-old woman who moved out to work 20-years ago, but now came back home.  The elderly lady said proudly to us, “When the building was full of people, there were more than 200-family members living here.  But now,  even tourists, only come during National Day; the villagers, only come back to celebrate Spring Festival!”

Photos are a courtesy of Cinci & Linda

Thanks to the development of the economy and the construction of new agricultural systems, today, the Hakka house is moving towards a new era.  We wish the culture of the Hakka house to spread widely and get close to the life of contemporary people.

Photos are a courtesy of Cinci & Linda

This dream is not too far from reality!  Step by step, little by little…  Like the Hakka house, such is the continuous circle of life.