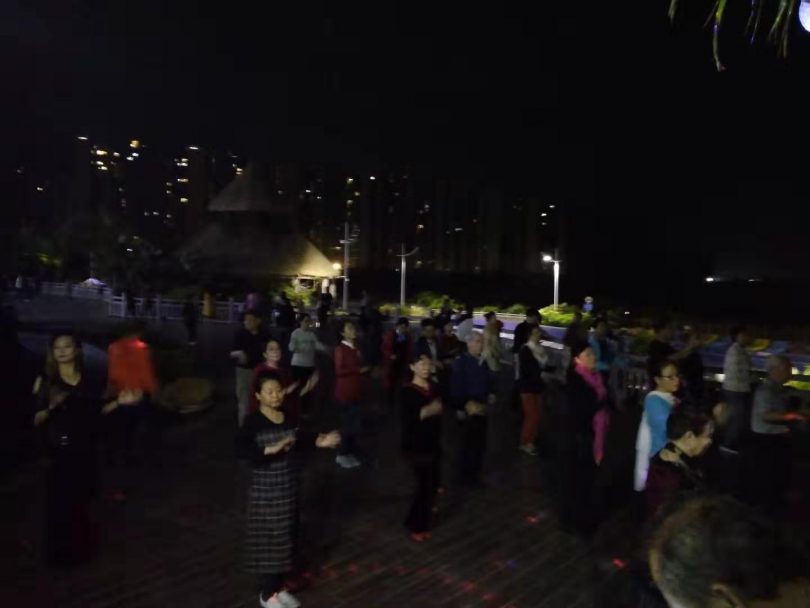 How did it begin?  Something so sensual…  And like all stories, every thing has a beginning.

The leader led the dance sexily and confident.  After all, she had been doing this for over a decade.  She, a person poised in stature, grace and elegance.  Her name is Wang Hua, with the gracious Hua; which represents her like the flower she is.  All dressed in black, tightly fitted and with gorgeously patterned dance shoes.  A middle-aged woman, but she had the body and energy of a 25-year old.

But the same could be said of Liang Sang Li.  Teacher Li, has the body of a young man, while spiritedly doing Latin dances: cha-cha, tango, mambo and samba.

Both teachers in their own right.  One like Li does it on the professional basis, Wang does it for the fun of it in the community of retirees.  From these two people there’s plenty to learn.

Wang Hua went and gorgeously walked while firing up her boombox.  She had been doing this for 10 years; however, for the past 24 months had developed a dance craze here at Silver Beach.  She’s been polishing her ballroom dance style over a dozen years.  She came from Shenzhen, over 20 kilometers away and developed here in the local Hui-dong community 100 to 200 daily followers who came here just to dance.  Within the group, there are eight other dancers with the potential and greatness of Wang Hua (male and female alike).

She further explained about dancing, that it was like, “Killing two birds with on stone!” Kept her healthy, it was fun and it was better than the gym.

Most people who danced were those like myself, in the middle-age bracket; the elderly also came out full of love and desire for this art.  But few young adults, sadly.

From left to right, two to four steps marked the spot.  It was manifested not in the local-dance styles or me, who learned street-styled dancing from New York City.  It was more classical, in a ballroom fashion.  Something I had little experience of.  And definitely, I wanted to pick-up and enjoy.

These, the songs of yesteryear with rhythms and the melodic-syrupy versions of Teresa Teng.

Then came a quick step to the waltz.  But after its completion, came a full step tango, something I had not done before.  Then came a rapid cha-cha, that was when I tried with a stunning lady dressed in a sparkling-black dress and open-heeled shoes, but I felt completely incompetent.  Trying to catch up with her style.  Either I was confused or stepping on her feet!  Here I came with a dozen apologies in Chinese and smiles, but it was still fun to do and watch!

It was the daily attraction, an attention grabber for the soul and crowd ‘pleaser’. Lights flickered suddenly in red, white, blue and yellow.  It was like one of these old disco balls, but the lights hung from a tree.  As the music came from the continuous boom box that the leader of this troupe jealously controlled.

The dances were not in a club, but outdoors, along this seaside town.  Where a person could feel the cool breeze from the sea.  Waves splashed softly, but it was the music which made the night for the next two hours (between 1900 to 2100 hours) a certainly magical night.

Tunes also rose in folkloric style, it was the traditionalism in Chinese music.

People here were never static, but always in constant movement with the distinctive-musical patterns and flows.

Ladies continued pearling themselves up in a gala of beauty.  With those nicely dressed in black or in the traditional-Chinese red to attract males to dance with them.

The area was perfectly set under the romantic-moonlight and exquisite fireworks.  It was a cultural experience altogether.

To end the night, and it was the literal ‘cream on the frosting’, came a Muslim dance from Xinjiang Province.  And it was when everybody got into their own groove of style, movement and space.

Through the night and my constant companion was Emma Deng: my colleague, friend and translator who before the rainstorms helped me with the interviews. Without her patience and time offered, after all the banter I put her through–this story would have meant absolutely nothing.  Thanks Emma and keep on dancing!

And so will I, because there’s nothing more magical than a dance craze.  Dancing is never a fad, but this craze is always continuous.