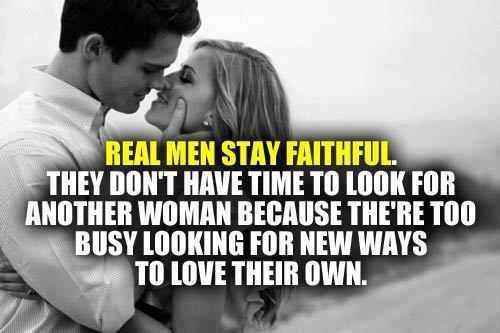 What it takes to be a real man and standby his woman?

What makes a real man?  Somebody who will stand by his woman when things get really tough, right?  I sure hope so!

As I look around, I see many males; however, with this generation, I see too few ‘real’ men.

What I noticed were these winning-over-pampered little boys too close to their mamas’ aprons strings, but not standing up for when it counts in defense of their women.

I’ve been close to half-a-century on this earth.  What worries me sometimes is the behavior of men.  I mean, I don’t pretend to be a Saint.  God only knows, as a young man, I was all too often a philandering bastard.

But once my wife came into my life, it seemed like all that changed.  You know, the switch, everything suddenly connected and my life turned around!  I became different and somehow grew-up to become a better version of myself years later.

Take the story of Francesca (a pseudonym), a family friend of many years.  She married, had her baby.  Then, after her second year into the marriage–things began to fall apart.  Her husband left her for another woman.

You all might say, Daniel, we have heard this story before.  And yes, 70% of men are unfaithful around the world.

However, here comes the first kicker.  Francesca was pregnant with the second baby and had to be hospitalized due to complications.  In those two-weeks, she was hospitalized, her soon to be ex-hubby didn’t even bother to show-up!

Way to go there, pal!  Sorry, the latter just reaps with sarcasm.

You see, he did leave her with a little ‘package’ before the relationship ended.

I’m not saying people don’t break-up and divorce.  It happens, what should not happen is what he did, not taking full responsibility either for his first and now, the second child she has inside!

The second shocker came when she called her husband and told him to basically “Man up!”

Well, she definitely got a mouthful from her interfering mother-in-law, arguing that she had been a bad wife!

Wow, incredible, Francesca’s husband was unfaithful to her.  He abandons the first baby, the second inside her and now ‘mommy dearest’ is arguing with the poor woman about being a bad wife!

What kind of woman allows this to happen to another woman?  Her son is unfaithful. She still defends and take sides for her ‘little Emperor’; while Francesca is left suffering the consequences.  Takes a lot a gumption from a mother-in-law to not see the clarity of day.

This could have been a teaching moment between mother and son.  I’m not saying, she stops loving her son.  But to defend ‘Mister Idiot’ against her own granddaughter, unborn baby and daughter-in-law takes a lot of nerve!  She doesn’t have to take sides, but not add ‘fuel to the fire’ by supporting her son’s indiscretion!

This says a lot about how women/parents are raising their boys.

Because where I come from, a man takes responsibility for his own actions and when he doesn’t–he’s just a mere boy!

I asked several females, “What makes a real man?”

Some answered, “Being good/nice to his girlfriend or wife.”

The best answer I received from a female colleague was, “Taking responsibility as a son, husband or father!”

With these passionate answers, I just had to say, “Perfect, just perfect!”