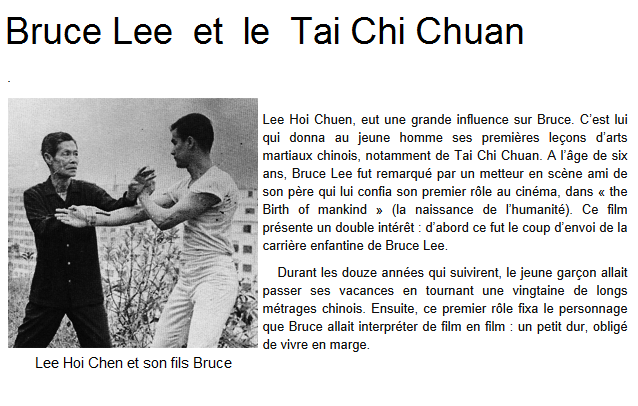 One of the oldest martial arts in the world; however, one of the ‘newest’ versions of self-defense styles in ancient China. Tai Chi is at the forefront of a 400-year old tradition, dating back to the days of the Ming General, Chen Wanting.

Tai Chi or Taiji has taken a hold on what traditional western medicine can’t do: improve health not only for the elderly population, but also for the middle aged and younger generations.

The other part of this sacred-martial art is the part of chuan or quan, meaning boxing-fist!

But it’s more aesthetic in culture, style and peace; differentiating from other high-impact/hardcore martial arts!

A self-defense art not to be confused with the competitive MMA (Mixed-Martial Arts). For MMA is used to destroy one’s enemy, while Tai Chi focuses exclusively on defense against attackers.

Because Tai Chi is to create a balance, without hate, between the yin and yang. Using the system of pushing-hands technique (tui shou), but without being violent or trying to hurt oneself.

Tai Chi, meaning the supreme ultimate, began as something to help Taoist and Confucian believers in achieving harmony for daily life.

This martial-arts form began in the United States almost 80-years ago. But didn’t take hold as a popular practice till the late 1970s and early 1980s. Since its ‘brother’ martial art, Kung Fu, came first and became more popular in the States; thanks to Bruce Lee and David Carradine.

That’s why it has hooked popularly with the older baby-booming generation (those born between 1945 and 1964). Not only in gaining popularity, but going through a revival once again in China and across the world!

As the old saying goes, “What western medicine can’t do, eastern-ancient ways can!”

Using the five elements: hands or weapons to train, breathing, slow movement, awareness of self and ultimate-relaxing meditation. It’s improving the coordination with the body and mind.
But, what are the health benefits to Tai Chi according to doctors in China and abroad?

Getting three of the best benefits: health, meditation and a pro-active martial art.

Inactivity is one of the major causes for death, heart attacks and weight gain in people after 40 or for those whom are retirees.

Health professionals recommend at least three hours or more a day of standing instead of sitting, and 30-minutes of exercise five times a week.

Tai Chi is one of the benefits, other than slow movements and walking. The martial art is low impact and stress free…

For this reason, other than China, Tai Chi has been incorporated into the hospital routines, clinics, community and senior centers worldwide.

What the exercise inspires is softness against brute force, to not injure oneself.

Therefore, Tai Chi is for life. And like its meaning, it’s the source, the beginning for a healthier lifestyle.