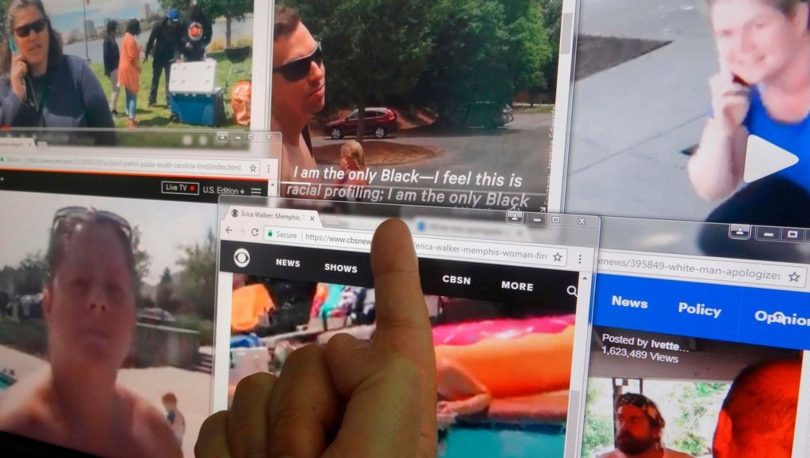 Calling the police against minorities only confirms one thing…

America’s deepest fears, insecurities and prejudices are based on ignorance

Lately with the string of calls to 911 and the police about petty violations. Racism again is showing its ugly head!

It had happened for years. But now with You Tube, the rapidity of the media and social medias, the news is out before anybody can contain it! This is happening with greater frequency, due to the proliferation of the internet; which allows citizens to post their achievements or misfortunes in less than 30 seconds.

And I have to ask myself, is public shaming the way to go? We humiliated the racist, but did we educate this social idiot about the realities in their own country?

I’d say, there ought to be a law for doing something like this. An infraction for wasting law enforcement’s time with stupid calls, when they could be out dealing with bigger issues like: rape, drugs, robberies, gangs, hate crimes and homicides. Yeah, giving the person a 300-hour community course on how to deal with different backgrounds and expose them to what minorities face everyday, in the best and worse circumstances.

Further, if the incident is one dealing with Latinos or Asian Americans, a little bit of ‘Español’ (Spanish) or other Asian languages ought to be thrown into the mix. After all, a second language doesn’t hurt anybody. It’s just to teach a little cultural sensitivity. And that we have the right to speak our language among our respective cultures.

For official business and work, I understand that English is the norm in the U.S. But in our community, we have free-speech and the right to speak whatever we want.

The above only shows one thing, with all our kindness and happiness as Americans, we are still a deeply divided nation racially. What’s more surprising, this racism is coming from the so called, ‘educated gentry’!

Yes, professionals lacking in basic empathy, tolerance and human emotion to know what’s really happening in their country. This ‘gentrification’ culture knows even less about the neighborhood and ethnic backgrounds who live in it.

It’s not an uncommon thing or a surprising phenomena, Caucasian escapists not knowing the reality or struggles of African-Americans, Mexican-Americans, Latinos, Muslim-Americans and other minorities.

What’s more interesting is, they haven’t even bothered to deal with those of different backgrounds; not in their jobs and even less at their dinner table.

These people are what is known as the ignorantly-racist, a commonality which has defined our President. Human beings also imitate the behaviors of their ‘fathers’/ leaders, whether they are right or wrong!

A new breed of American who has a lot of education, little common sense, too much time on their hands and lack comprehension/compassion about other ethnic backgrounds; especially if its outside of the community they grew up in.

As you may know, America has presently shown an extremely ignorant side. Starting with the racist rant of a lawyer because the employees of a restaurant were speaking Spanish. An Asian-young lady verbally attacked by an older woman; because she was speaking her language inside a Starbucks and the older-white woman telling her to go back to ‘Asia’ or ‘China’. Then, there was the woman who tongue lashed a veteran, a Korean-American over a minor traffic altercation and told him once again, “To go back to China!”

Demonstrating complete stupidity and lack of knowledge about Asian culture. Not everybody who appears to be Asian is from China or Japan. But Americans often confuse the two!

There was the African-American music producer waiting in the first-class queue for his flight, when a white woman continuously harassed him. By telling the producer, he didn’t belong there. Later, he shut her up by mentioning he had the money and was a music producer. Afterward, what came out of his mouth further ruined the moment, when he used the words, “Just a ‘nig***’ with money,” towards himself! A word which I often find offensive, even when used amongst African-Americans.

This hasn’t stopped the idiots from coming out…

Calling the police on the two African-Americans at Starbucks for not buying coffee, while they were sitting there waiting for a business opportunity. Or the African-American graduate student at Harvard who was just napping in the library and a monitor called the cops on her.

Yep, the ‘BBQ Becky, Permit Patty and Pool-Patrol Paula’ shows what this country is still facing after 242 years of history. How ridiculous we’ve become. When a neighbor has to overreact and call the police over an African-American child mowing her lawn by mistake.

We are a deeply divided nation, literally ‘shooting first and asking questions later’. Overreacting and crying over every minor incident. Wondering if, with all our technological advances, are we isolating our country and ourselves even more inside the American-society?

I grew in a community where we had during the summer annual block parties to exchange our food and culture with the rest of the neighbors. It is not that there weren’t any prejudices, but we flourished in our differences!

Tragically, neighbors don’t share at the same table anymore. There’s a lack of acceptance. After 9-11 it has been replaced by bigotry and hatred!

This divide is the one causing the problems at the border and I.C.E. arresting aliens who haven’t done anything wrong, and throwing them out of our country like the everyday waste!

I think of David Bowie’s song, ‘This is not America’ and it breaks my heart!

Another problem I often find in America and it has always been this way, our mistrust of outsiders and we profile too easily [even before the days of President George W. Bush].

To give the readers an example of what minorities face… Twenty or twenty-three years before, if I dressed in a leather jacket, jeans, combat boots and bandanna–I was stereotyped as a biker-gang member. Why? Because this is what happened next… As the incident escalated, when I tried to board my American Airlines flight, and soon after, I was stopped by Customs Agents.

Then searched and patted me down, while they were telling me throughout my ire, “We are only doing this for your safety!”

My only answer to them was, “Yeah right, you didn’t search the six-foot-four white guy with muscles. Yes, the one who could easily tackled all of us! But you targeted the Latino who is five-foot six and a member of the Armed Forces!”

Then they lashed back, “Sir, that’s our prerogative!” and after humiliating me, said, “Thank you for your service,” which was by then useless!

My sarcasm came through, “Your racist prerogative,” then they soon let me go to catch my flight!
It happened not once, but twice and with the same airline.

This time, I had left the service after an eight-year stint and allowed my hair to grow down to my shoulders! I went to the airport in a suit to pick-up my then girlfriend. When my girlfriend didn’t show-up, because she was delayed on another flight. I approached the AA representative at the airport to see what was going on. I almost had to beg her to get the information. She would look at me up and down, making facial gestures, mumbling under her breath. I knew, this woman must think I’m a drug-dealer or something. When I tried to talk to her, she wouldn’t even look or acknowledge me. If she only had asked what I did for a living, I would have told her proudly, “Teacher,” because I’ve been doing this job for a better part of 20 years.

I’ve seen how badly the flight crews treat the people coming from the Middle Eastern, African and Latin American countries.

Like in the days of Mark Twain, the great essayist, when he thought that travel and exposure broke down prejudices.

Because ladies and gentlemen, racism is often taught, learned and passed down stupidly from generation to generation.

You want to have a non-racist kid, start by desegregating and exposing them to all cultures. Then, that will really be a country we truly want and worth living for!