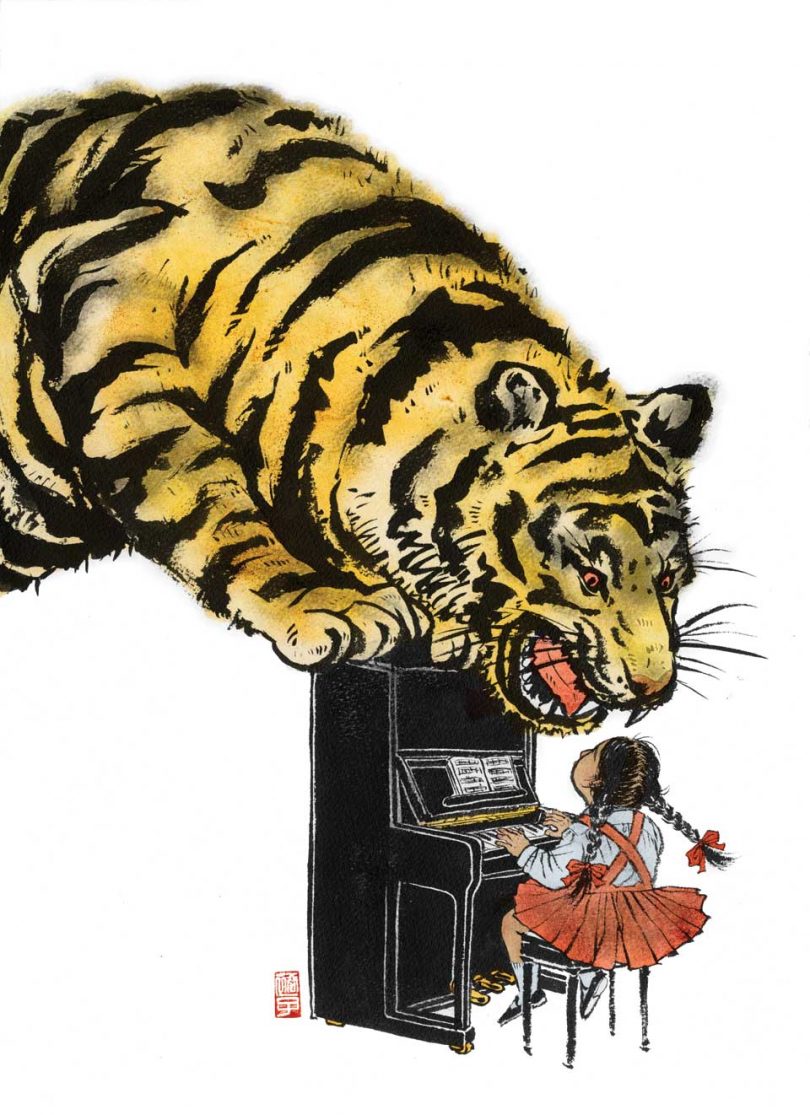 This concept began with Amy Chua, author of the book – ‘Battle Hymn of the Tiger

Image from the New Yorker

A woman who is a strict disciplinarian. Nothing to do with abuse, but her responsibility as a mother is to give due diligence and protection to her children. Something often not easy for working mothers.

But one who doesn’t mess around with a child’s future. And she always wants her child to be the best.

For example, when a child takes a test and brings home the score of 99%. She’ll come out with rapid criticism, “Why not 100%!”

She’s basically building her child to have a successful future in an often uneasy and cruel world!

But there are times when she’ll go to a dramatic extreme.  When she tells her child who just got a passable or lower grade, “Oh my goodness, you have dishonoured all our ancestors,” as she shows the kid the paper with a possible score of 70 or 80 percent!

Acting as if she wants to die! Funny as it sounds, it’s often true.

‘Tiger mothers’ love their children, but it’s a different kind of love. One in the majority of cases, whom is overprotective and pushy for her child to be the greatest thing since ‘apple pie’.

Call it what you will or for what it is, but I honestly say, “It’s bossy!”

‘Tiger mothers’ have to be careful though; she can criticize, but needs to know when she’s building and not ‘breaking her child’s spirit’!

Because a broken child could be useless in life! Therefore, there needs to be a balance.

Ms. Chua’s controversial book dealt with the Chinese system of raising and educating her children to be outstanding. At times, she self-ridiculed in the way she educated/raised her kids. But there aren’t any apologies in her parenting style, whether we accept the system of rearing or not!

She’s definitely correct in one thing, parents need to develop a child’s self-esteem and confidence. It’s paramount if the kid is to get ahead in life!

One thing’s for sure, to be a parent is 24-seven, and there are no shortcuts.

Compared to the Western style of education; which is often too permissive and that’s why we have people who are lacking in self-discipline, obese and on drugs.

In my opinion, the Chinese method has worked successfully and there’s something about it which is grand and I like it!

I like the way Chinese children are more involved in learning something. Even if it’s literally boring them to death!

However, what I don’t like about the ‘Tiger Mother’ system is: it reminds me too much of the military. A system I try to rapidly [if I were a parent] to get away from.

You see, calling a minor ‘rubbish’ or ‘pathetic’ for me doesn’t work! That’s where Ms. Chua’s concept is disagreeable to me. Here we part ways. You can do that with adults, but with children, no way!

At the same time, I love the system of repetition. It’s no wonder Chinese kids are better in Sciences and Math than their Western counterparts.

One thing is for certain, Ms. Chua hit a chord. Her idea of the ‘Tiger Mother’ became popularized throughout Chinese-soap operas: with hits in mainland China with the actress Zhao Wei. The popular series in Hong Kong, ‘Tiger Mother Blues’ and Singapore’s own, ‘Tiger Mum’ speak for themselves.

OMG, I suddenly realized I have a version of a ‘Tiger Mother’!