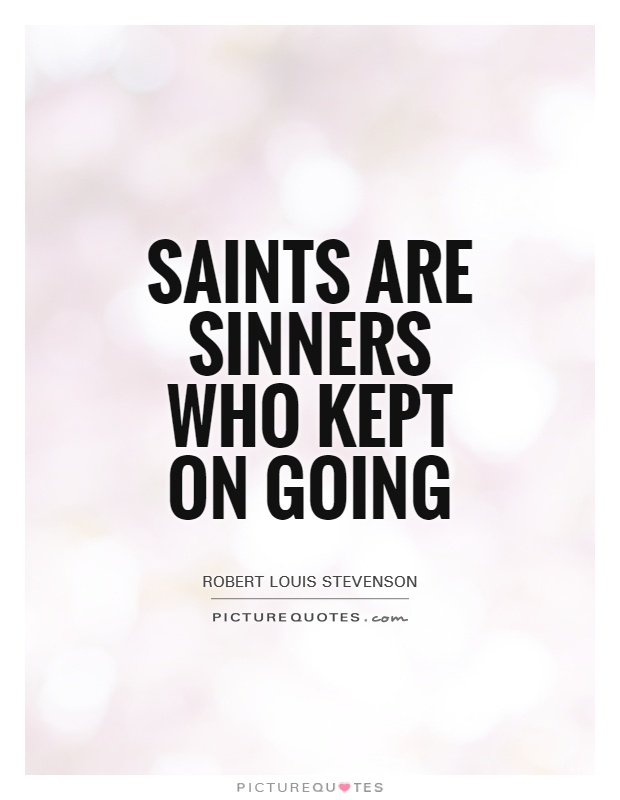 Before being a saint, one has to be a sinner

“The only difference between the saint and the sinner is that every saint has a past, and every sinner has a future.” – Oscar Wilde

When we come into this world, we are born with that fresh-baby smell and the purity in our hearts. That starts to erode as time wears on. Affected by problems, dealing with mistakes and the consequences of those mistakes. Live and learn, right!

Then, as time passes we become sinners. Stained/tainted by things, whether they are taught or we pick them up negatively through our existence.

All of us have to face these issues, and nobody is above or impervious to them.

The problem happens when we place stars and public figures to the above standards, and think they can’t do no wrong. Right, no, wrong!

They are sinners like us and we expect so much of them, when they are in the dirty business of entertainment. A world often mired with backstabbing treachery, infidelity, cruelty and adultery. These figures are easy discarded like an old-toe rag: whether it comes from the producers or their fans.

So, why do we place faith in such imperfect people?

It involves the feeling of idealism, one often lost in the world. That elusive ‘Utopia’ (perfect world) that everybody is searching for.

We see them do these portrayals on T.V. of Mr./Mrs. ‘Goodie-Two-Shoes’ or sing these elevated songs of love and forget, hey these creatures are bound to make mistakes!

Forgetting that they have needs, desires and temptations just like us. But in our own minds, we have placed these stars on pedestals of Saintliness.

Oh brother, and when they fall, they sure do it like Icarus.

The same way public figures are elevated, they are also toughly scrutinized.

When they do something wrong, we put them through the ‘court of public opinion’. Because people forget [like all of us] they are tempted either by: power, corruption, greed, sex, alcoholism, drug-addiction and gambling.
But once they fall, the toughest thing for these people is to get back up! When they do and if they recover, this is the long road from being a sinner to becoming a saint.

Because we have what is known as experience of life. And usually, when we’ve been scorched by scandal and controversy, most of us say, never again. Unless we are that stupid and lost to our own senses.

Take men like Jaycee Chan, mired by controversy and in prison for his own demons with drugs. Or one who sure made a comeback was Robert Downey, Jr. Yes, that same Robert Downey who is today successful in the Marvel’s Avenger films. However, in the 1990s he nearly threw his career away do to drugs and alcohol. Both men turned their lives around.

Next time you want to consider a great or famous person beyond reproach, don’t! They are human beings with their flaws, just like us.

Better to focus on those great men and women who once existed. Those who went from being the greatest of sinners [from experience] to becoming the grandest of saints! Then here is where the true lesson is learned.