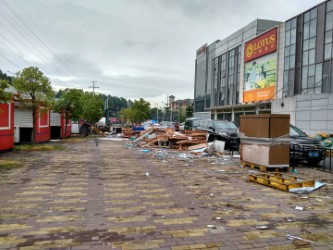 Don’t say, “I love China!” and then behave like an utter idiot or slob

Often, I get these speeches. You know the ones, the typical lip-service from foreigners and Chinese who do nothing for a place. It’s not a majority, but when they come, they seem to come out of the woodwork and hang out with each other. Those who then want to eagerly say, how much they love the land or country they are in.

Take one day, I’m walking from the local Lotus supermarket, when I see these men pumping and throwing the rubbish all over the sidewalk.

I ask them with my ‘Brooklyn attitude’, curtly, “Now, where in the hell am I supposed to walk?”

One laughs, “Well, you can always go around!”

I’m sarcastic, “Wow, it just shows how much you love China,” as I went around avoiding all the glass, nails and debris they were throwing around!

The guy really got irked and continued addressing me as I waved, he yelled, “I love China, okay! I love China!”

This hypocrisy has always bothered me. The over-speaking from people who one minute are saying, “I love China!” and just like that, throw their cigarette butts on the floor. Or the group that on a Friday night decided to ‘paint the town red’ and pick a fight with everybody.

Questions, how is this fostering good will, peace and a cleaner environment?

The same people who can’t walk three meters to the nearest rubbish bin. And the others who won’t visit a cultural relic/museum, but can sure easily find the nearest bar literally with their eyes closed on a Saturday or every night of the week for that matter.

Golly, I’ve seen them every once in a ‘blue moon’, and sometimes I had to literally get ‘Brooklyn gangster’ on some of them with my mouth!

I don’t generalize, but there is a problem.

I mean there is, and one time my spouse had to correct a foreigner who rudely pushed her aside! I guess he didn’t expect her to speak perfect English and say, “Hey man, watch it!”

Yep, the same people who can easily look and criticize you for being different. These so called lovers of life and their country, but have never done anything positive for it.

Don’t worry, if you think I’m about to only criticize Chinese. This isn’t the case.

I’m also focusing on foreigners who can’t seem to stand-up for anything in life, except for being part of the problem and not the solution.

My words came out, “You see, I served my country and had a career! Protected my land… I came to this one and enjoy it as much as a can. And do my best to also respect and protect it. Now, what the [vulgarity] are you doing for this place? Please, tell me, show me! Ya morons!”

Suddenly, their false bravado went down and all they could do after being stupidly arrogant: was to mumble, throwing a couple of curse words under their breaths and slowly leaving the scene where they were harassing everybody!

Part of the problems is when nobody vocalizes anything, but allows everything!