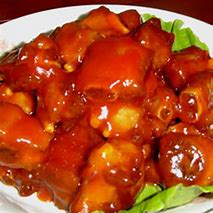 One of the ‘newest’ in China’s long history. Hedging along in vibrancy for the last four centuries. Indeed, it’s older than most country’s in the hemisphere.

However, what influenced Shanghai throughout the past centuries?

It has been mentioned over and over, that provinces like Jiangsu and Zhejiang made their significant contributions into the amazing local platters: which the Shanghainese, migrant workers and foreigners presently enjoy with a gusto.  The local-town folk may disagree and say that, it’s only and exclusively from Shanghai these amazing flavors.

But, let’s see why Shanghai cuisine is so special and practically caters to the sweet tooth.

The locals call it, Hu cuisine.  One that’s elevated with each serving of the Benbang dishes.

Whether its through local vendors selling their street snacks, food-sit ins, kiosk to the high class four-star restaurants.  It isn’t only about the intense aroma.  Food concentrates in a succulent way when flavored correctly by the palate.  You can’t beat it and it’s unique throughout the four cardinal points of China.

It goes from the savory sweet-tooth varieties to sweet-and-sour versions across the street markets.  Showcasing its influences in areas like Qinbao Town.  It’s tempting to eat everything. A person has to be a glutton for great taste.  At least, I am!  I want the best of the best.  Therefore, the selection process is difficult, because everything looks and is so yummy!

The culinary-Shanghainese style spread throughout China: like Taiwan and Hong Kong with its flavors migrating after World War II.  The culinary-infusion of ideas inspired from the city of Shanghai went up and down the coastline and into the islands which hug the periphery.

Let’s start with the basics and go from there…

Experience teaches to begin with the skewered quail.  The bird just goes down excellently with a Tsingtao beer.  I’m often up for a hearty beer, therefore, I go for a strong-dark lager while I’m eating it.

For those pork lovers, whether you’re on the streets or eating it inside a restaurant.  It’s just succulent to savor an order of red-braised pork (hongshao rou).  In a way, it’s quite sweet.  The way to order is with the elements of sweet-soy sauce (tangcu paigu).  This way, it’s given a flavor to the sweet-and-sour.  To better explain it.  The dish is one of spare ribs, with its decorative bone in the center, simply gorgeous.

Spring-bamboo shoots (Yan Du Xian) is another plate the city of Shanghai loves and holds to dearly.  Like a jealous person of their lover and so it’s the same with their dishes, some keep this one a guarded-secret.  It’s cooked in several stages.

And this particular one is not so easy to come by, because the bamboo shoots are cooked in a marinated pork (usually in layers of fat).  Adapting to different flavors and styles: by placing either mushrooms, dried-tofu bows that has been already marinated in chicken…  The process is slowly but surely continued with ginger, Shaoxing wine and dry-spring onions.  This is a light, traditional and flavorful dish. To cook this recipe takes a lot of elements, patience and time to have it well done! The cook has to be jealously watchful of it!  How do the chefs know when it’s done? It’s tender and the bamboo shoots are crunchy, like a taste of spring.

Oh, it was an eye opener.  Didn’t even know the bamboo shoots were edible till I came to China years before and traveled/lived throughout Shanghai, Zhenjiang and Jiangsu.

When coming to Shanghai for a visit or whether you live here, start with the basics and work your way up.  I promise you won’t regret having these savory dishes. These which will not easily disappoint.  You have four to choose from, so begin pleasing your taste buds through the main roads and back streets of Shanghai.  Enjoy the journey and eat till your heart’s content!