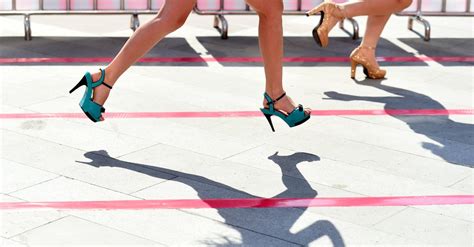 High heels and their fascination

“A woman will never be ugly in a good pair of shoes.” – Coco Chanel

Shoes have been part of our daily culture for last past 10,000 years.

But in Ancient Egypt, shoes began to make a statement; especially among females. These items were the indicators of class and social status.  Differentiating a noble, from a commoner to a slave by what they wore or didn’t.  For example, the sole was made out of pure leather if the person was from noble birth.  The commoner wore papyrus sandals and slaves simply went barefoot.

This history is older than that of China’s.

However, what made women have this fascination for height and the feeling of sexiness?  It actually began in Ancient Rome among actors, courtesans and prostitutes.

The wooden pump gave a person more stature and the arch was to give that beauty for the female’s hips and legs.  Giving them that sexy feeling, movement and attractively-accentuating those leggy women.

Through time and as men began noticing this fashion in women; so they began to feel enticed by the attraction.  It wasn’t only to attract men, but give women that much needed confidence to achieve “…who and what they wanted to be.” (Coco Chanel)

The wooden pump (buskins) took the center stage in many royal courts throughout the world. Often used outside to walk and avoid getting mud on the garments.

High-heeled shoes also brought other problems into the mix: painful arches, corns in the soles, deteriorating ankles, swelling of the knees and back aches.

Like in the past and extremely painful foot binding in China, this also became another form of torture.

Till present-day, women will always sacrifice comfort for beauty.  This is a given fact.  Don’t try to argue against it!

But what really brought shoes into the light of fashion was thanks to the invention of the sewing machine in 1844.

At this moment came the westernization of shoes in China.  And women who had the means to wear these opulent items, also showcased them throughout Beijing, Shanghai and Hong Kong (checkout down the Causeway, Wan Chai or Admiralty to buy those beautiful shoes and showoff later your sexy gams).

Over a century later, thanks to the French fashion designer, Andre Perugia.  The stiletto was born in the 1950s.  Giving women a sexier look to their legs.  What woman doesn’t want to be noticed and who doesn’t like to look at a beautiful set of legs?

The Kitten heels made their introduction in the 1960s, with those smaller pumps in four to six centimeters in height.  In those days, if the heel was higher, it was considered too promiscuous for young ladies.

But in contemporary times, what made a glamorous fashion-shoe entrance were those styles by Christian Louboutin and Manolo Blahnik.  Thanks to Sarah Jessica Parker in “Sex and the City”, Louboutin’s signature-red soles skyrocketed across the globe.

Billions of women around the world had this new attitude, “I gotta have ‘em!”

The women of Shanghai were introduced to these patterns when stores like Nine West and Alexander McQueen’s designs began sprouting about for the professional-elegant and modern woman.  You’ll notice these women intently measuring footwear (as if studying for an exam) and intensely looking into a mirror to the right, left, front and behind.  Once it’s perfect, she knows she can take the pair.  That which could easily conquer the senses by walking and showcasing her best. Those shoes, envied by most females and desired by those whom wanted to wear them.

Especially these women going to work around Shanghai’s CBD came to be noticed and the city became a one of the Fashion Capitals of the Far East.

Have you ever noticed a beautiful woman literally sprinting in high-heels?  It’s a miracle she doesn’t take a tumble and you have to admire any woman who can do this!

By the 21st Century, in the last five years the wedge sneakers came about to the delight of all women for the comfort of their feet and on the run thanks to the French-fashion designer, Isabel Marant.

Presently, a woman has to right to wear what she wants and when she wants.  But one thing is certain, high heels can still be extremely painful after wearing them for several hours.

Now, as a man I wouldn’t dare tell a woman what to wear.

And it has been suggested to limit high heels over 17 centimeters in height.  Even better, half of that high in sandals or low pumps can be as sexy as any higher shoe.

Where to find these shoes in the city?

Well, depending on your desire and budget, you can start along Xinyi Road.  There’s always the Shanghai Mart around that area.  For cheaper variations, there’s always Qipu Road Clothing Market.  Can get any better than that!

Now that you bought that perfect set of shoes, how about a matching dress?