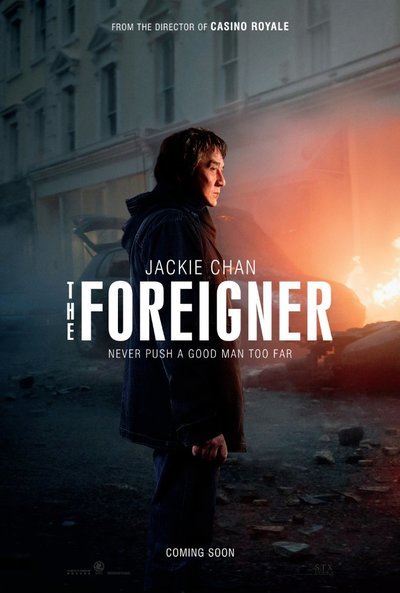 Now, before I get into the narration of “The Foreigner” to give it a critique.  I’d like to express on why this 2017 film is a breakthrough film…

In 1970s New York City something special was about to happen.  A slew of changes when Chinese actions stars like, Bruce Lee came into the limelight of superstar dome and success through his Kung-fu flicks.

Asians, African-Americans and Caucasians flocked to the movie theaters across the city and places like Chinatown became a hot spot to hangout and watch these features.

With Master Lee’s death, a vacuum/void was left and nobody was there to fill its gap. Then, five years later came a man.  He seemed to do ‘magical’ things with his hands and funny enough, in a comedic way.  His name, Jackie Chan and he appeared in “Drunken Master”; the films which opened my eyes and made me dream about coming to China.

Mister Chan broke into Hollywood, and others would likely follow: Jet Li and Chow Yun-fat.  But sadly, in the portrayals of secondary roles and only the typical-Caucasian face was there to save the day.

These past five years have seen a breakthrough once again of the Chinese action and dramatic star across the international spectrum in the cinema.  Not since 15 to 25 years before had this happened.  Women like Gong Li and Zhang Ziyi made their screen debuts as international-film actresses, but afterward, there was nobody there to carry the torch.  Not even a blip on the radar.

Presently, this is changing.

Films as well as T.V. shows have made an impact in society, and have exposed the beauty of Chinese culture, language and society for the whole world to see.

From Eddie Huang’s “Fresh Off the Boat”, Marvel “Agents of S.H.I.E.L.D.” with its two-gorgeous actresses, Ming-Na and Chloe Bennett to Gemma Chan in the BBC’s T.V. series, “Humans”; has Chinese-Americans and British-Chinese getting greater roles and better screen opportunities for exposure.

Why is “The Foreigner” a breakthrough movie?

In the film “The Foreigner”, it showed what great acting and gymnastics can do. However, it also focused on Jackie’s comeback as a major-action star and that age has no hindrance.  Furthermore, it shows the sexy Tamia Liu (the lead actress from Ode to Joy 1&2) ‘making her bones’ in the international cinema.

The story takes places, when Quan’s (Jackie Chan) daughter is killed in London during a terrorist attack perpetrated by an extremist faction of the Northern Irish organization, IRA.

Quan wants answers, therefore, he goes through the police.  When this doesn’t bare any fruit, he’ll leave for Belfast to confront the leader of the IRA’s political arm, Liam Hennessy (performed by Pierce Brosnan, you know, the guy who was formerly James Bond).

Leaving all his possessions and restaurant to his friend, Lam (Tamia Liu).

Quan wants names, so he begins to pressure the group by planting bombs and attacking them.  With his sudden set of skills, people begin to wonder about Quan’s background.

When the IRA begins to investigate this British-Chinese national, turns out, Quan was a member of the U.S. Special Forces during 1970 (Vietnam War).

The movie not only shows the gripping pain of a father out for vengeance, but these emotions tug at your heartstrings throughout the two-hour motion picture.

What Jackie brings impressively back, for this 63-year old actor, is the good-old fashion charm of martial arts, gymnastics and stunts he is known for.

At the movie’s end, Quan survives and is reunited with Lam in a tender moment. Ending the movie with a sweet kiss.

However, the movie did one noticeable mistake.  If Quan is a 61-year old man, it isn’t possible that he was in the Vietnam War in 1970.  He would have been only 14 years old and soldiers in the U.S. Army weren’t permitted to join the military till they were 17-years of age, with the consent of their parents.  And to join Special Operations, you have to be at a minimum of 19-years of age.  Therefore, the mistake was by five years off.

Other than that, I gave this film three-and-a-half stars out of five.  For its emotional intensity, fight scenes, its breakthrough style and with a great cast.

Keep it coming, Jackie.  You still got it!