These are laws and policies established internally or abroad for the better sake of governance.  However, these laws, whether they were stupidly conceived, with good intentions or racist; they still affect the American public today.  Millions of its citizens still pay the price and the solutions are far off to be properly corrected any time soon. 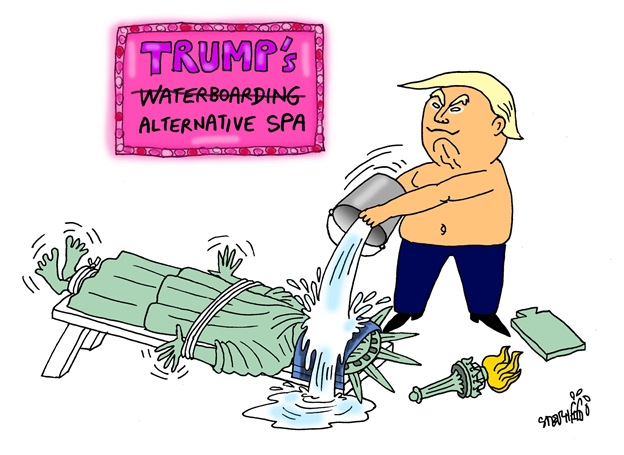 Let’s start with the Manifest Destiny and the U.S.’s conquering of the west.  The government didn’t only displaced 20 million Native Americans from their lands, but created diseases, alcoholism, violent deaths, drug addiction and present-day poverty among a proud people.  Presently, people are still affected.  Forget about blaming Columbus.  In the 19th Century the taking of Native lands and placing them into reservations created a problem with unforeseen consequences.  Visiting some reservations by the 20th Century felt more like visiting a third-world country than a part of the United States.

It also created problems with the Mexicans who lived in the South and Western Territories.  With the Mexican-American War, in 1948 the U.S. took eleven states which originally were part of Mexico and made them by force part the American territories.  By conquering places like Texas, till this day, we have Mexicans complaining about their rights to come and go as they please; whether it’s legal or not, we took something and tried to push others out whom had lived their for generations.

Did anybody read about Hurricane Maria and the problems in Puerto Rico?  The issues other than natural disasters began with Puerto Ricans since 1898, the Spanish-American War.  After the war and the territory was conquered by the U.S.  The American government decided to create the Boot Strap program, therefore, making a society which entirely subsisted off the land into one that lived on handouts. Creating the problems and havoc, when you have in contemporary times 48 percent of the population subsisting in a welfare state.

Prohibition or the Volstead Act, the law to limit and eradicate alcohol made matters worse.  Instead of bettering the scenario, what it did was give rise to the modern-day gangster and organized crime.  Before, crime in the U.S. was just petty theft in major cities.  Then, with this law implementation, criminals joined forces to make illegal profits from booze, gambling and prostitution.  From here began a wave a violence which would spread across the land from 1919 to 1933.  This wave of violence hasn’t entirely disappeared. In certain cities in the U.S. there are major problems with gun violence and control which persist till this day.

Another, the Vietnam War is the conflict which continues to create social as well as health issues.  However, for 16 years, three Presidents, 58,000 U.S. troops killed and millions of lives destroyed on both sides, America fought a war it could possibly never win.

The CIA wrecked havoc throughout Latin America in the 1950s and 1960s.  But what this organization did in Chile in the 1970s was a violation and blatant disrespect to another country’s sovereign status.  By killing its President, Salvador Allende, it implemented one of the worse dictatorships seen in history, led by General Augusto Pinochet for 17 years.

Later, the same was done by ‘Langley’ (term often used for the CIA) by deposing Mosaddegh and placing a puppet leader, the Shah of Iran.  Backed by the American government, the Shah remained in power for 27 years.  But not before, abusing, torturing and killing thousands of his countrymen and women.  What the Shah created was the radicalism seen today in Iran.  In 1979 it spilled onto the streets and caused the Iran-hostage crisis.  When the revolutionaries took control of the U.S. embassy in Teheran and held 52 American hostages for 444 days.  United States and Iran severed all ties and today that standoff still remains.

Then America went on to back monsters like Saddam Hussein in Iraq, and that would be another issue to solve down the road in 1990 – 1991, 2003 – 2011.  By the way, has anybody seen the photograph of Donald Rumsfeld shaking hands with then President Hussein?  It’s a site to see and shows true hypocrisy in the way the U.S.A. conducts business as usual with despicable personalities.

With the Iraq War, capture of Saddam Hussein and lying about WMD (Weapons of Mass Destruction).  The U.S. caused a civil war, the growth of ISIS, a spike on extremism and terrorism.

During the Reagan years came the privatization of America’s institutions.  The problem with that was, it benefited the upper and rich classes.  But it marginalized minorities in the inner cities, taking away their opportunities.  The gangs flourished considerably in the 1980s in cities like New York, Los Angeles, Dallas, Chicago and Miami.  The after effects of privatization are still felt today, with little increase in wages and cities like Chicago continue to tear itself apart.

Did anybody see Charlie Wilson’s War?  As much as I loved the movie with Tom Hanks and to watch the sexy Julia Roberts.  There’s a unique truth to all of this, yes, the weapons sent to the rebels in Afghanistan to fight the Soviets did help them.  But do you all recall a certain name amongst those rebels, a man known as Osama bin Laden.  With funding from the U.S., the government supported and trained rebel groups like al-Qaeda and the Taliban.

Years later, Americans would fight on Afghan soil and subsequently, the opium recovered in Afghanistan would sadly fuel the present epidemic of heroine on U.S.’s streets.

The 1990s saw the largest incarceration growth in its history.  With laws implemented by the Clinton administration on ‘three strikes law’, a person could easily go away for life.  There was a further increment in people going away to up to 15 years for having less than five grams of cocaine on them.  It didn’t matter if it was a trafficker, the local-drug dealer or the habitual user.  Further, incarceration became a billion dollar business in America.

It didn’t end here, with the deportation of gang members like MS-13 to their countries in Central America. A new wave of violence spread throughout countries like: Mexico, Guatemala, Nicaragua, Honduras and El Salvador.  This violence caused millions of Central Americans to flee their countries for the United States. Causing the border problems and violence we have today.

Then, with the 9/11 terror strikes on the U.S., the Patriot Act was established. However, there was one fault with this act, it fueled more unwarranted paranoia than needed amongst people and law enforcement. Because this law spiked the cases of hate crimes, racism and racial profiling throughout the U.S.  A problem that still persists presently.  More than ever, for religious or ethnic reasons, people are often targeted, stopped and illegally searched without probable cause.  And this my friends is a clear violation of a person’s civil liberties and rights.

Obama and Trump left another legacy in their wake, and it wasn’t Obamacare or the repelling of it. Narcissistic behavior among the liberals and the rise of right-wing nationalism disguised as racism has begun to spread and grow across America.

America has all the potential to be great again.  It’s already great as a matter of fact, but one thing Professor Howard Zinn mentioned before he passed away.  It’s up to Americans to acknowledge and correct who and what they are, and never continue repeating the same mistakes over and over–out of sheer stupidity.  If not, all that’s been done is to make the world hate the U.S. more, and allow America to lose its credibility and luster.