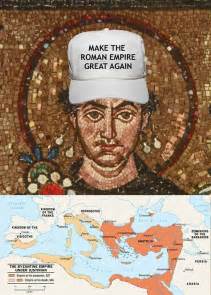 The American and Roman Empire are one of the same

Simple enough, the Roman Empire began with the unification of its territories inside and outside of Italy. At the height of its power, it extended as far as Britain to the west and Constantinople (present day Turkey) to the east.  The Empire to the west lasted nearly 1,000 years and further to the east, it lasted 1,000 more.

What unified the Empire, other than Latin, was the fact that Rome was an innovator in every way.  It was admired.  It brought its spirit of unity throughout its paved roadways and made cities like Rome stand out as a metropolis with inventions such as concrete.  The people from the lowliest to the highest prospered from its gains, when the wealth trickled down.

However, as the Roman Empire continued fighting wars for hundreds of years.  It brought more enemies upon itself than it could handle.  Therefore, later, to defend its borders–they had to use non-Roman mercenaries to do the job many Romans did not want to do.

Other than over extending itself, was the fact that Rome spent more towards the end than it collected through its vast territories in taxes.  Too many wars brought on inflation and spending that exceeded the coffers of wealth.  Therefore, causing government to bankrupt.

Corruption was another factor that continued weighing down on the Empire.  From the Emperor to the Senate, in the beginning they were there to serve the people.  Now, they only went into politics to line their families’ wealth.  Destroying possibly the fabric of a society that excelled further than Ancient Greece in democracy, politics, philosophy, as well as medicine.

Rome was once beloved and soon, towards its bitter end had lost its luster and for the known world at the time, hated everything for what it stood.

They betrayed those whom served them well by killing, forgetting or abandoning those who were loyal. Enslaved kingdoms and abused the trust of the people it was supposed to protect.

The common citizen was made to suffer, while this abusive system only believed in taxing money for the elite.  The poor were meant to suffer and rot.  This economic disparity brought more bitterness against the Empire.

And as mad Emperors took to the throne, the people tired of what was done to them, the commoner.  The throne became something for the families of the upper classes and not for those who earned it fairly as politicians or soldiers serving Rome.

At one point, as a means of distraction…  It became an Empire known for its games and its brutality in the gladiator (superstars at the time) challenges than for doing for its peoples in need across its lands.

Finally, with one stroke, in 475 C.E. the Empire ended by the constant attacks of Barbarians breaking through its borders.

The United States has lately defined what it has been doing wrong all too well.  And tragically, it has, by repeating what the Roman Empire did fifteen-hundred years before.

In the case of the U.S., the difference here is, the Americans haven’t had 1,000 years to do it.  But are self-imploding in less than 241 years.

United States began as an awesome beacon of admiration.  A place for tired souls to escape the abuses done in their respective countries and seek refuge in America.  Yes, America did mistakes, but it was always considered the land of the free.  One for freedom of speech and not one to persecute those whom were down and desperate. And for being a unique melting pot, it was admired throughout the world–at least until recently.  Even countries like France looked at us back then as a land of hope.  Not like today, as the French look at Americans with antagonism.

Americans have been in 73 different conflicts since its foundation.  This is not including 130 other engagements started secretly by the C.I.A. in other countries; from illegal assassinations, civil wars and coup d’etats.  Talking about nations hating the States, well, thanks to its government intrusiveness it has certainly earned a reputation in infamy.  Using now mercenaries to do its dirty work, like the non-Roman legions did over 15 centuries before.

The U.S. goes to war on average of every three years.  Usually at the beginning of a conflict, America starts as a liberator and ends as an invader.

Once I heard while in the service somebody telling me, “I’m tired, as Americans we are ‘fishermen to the world’ and nobody seems to appreciate us!”

I answered with biting honesty, “You have to be kidding, right?  Americans don’t do anything to help others, unless we are motivated by money…” and I didn’t believe entirely my own words.  Since, I did believe I went to other countries to help others.  However, it was my government which impeded our successes.

If you can’t believe me, take wars like Vietnam, Iraq and Afghanistan.  Can we honestly say, that these conflicts were won by the United States?  Oh, please!

Then U.S. citizens blame countries like Bolivia, Colombia and Mexico for trafficking their drugs into the U.S. border.  America has fueled the narco states and wars, and it has made 20 percent of its society addicted to drugs–most common: oxycodone, crack, cocaine, heroine and crystal meth.  If it’s not narcotics, then its people whom are morbidly obese.

What has substituted the past gladiators?  Ah ha, it’s now these egomaniac chefs and reality T.V. stars hurling insults wherever they go at the public.  Forgetting that, it’s not about getting, but it’s about giving to the community who built you up.  Young people believe this is the way to achieve success, by treating others like trash and leaving behind all sense of decency and furthermore, humanity.  Sounds a lot like the Roman Empire towards its end, right?  Except without the Coliseums and blood lust. It’s more about the distraction into mindless television and escapism to forget our problems and not focus on what’s happening in the country and solve the issues of the day.

Politicians are more interested in lining their pockets than helping the common citizen. After all, like in the days of the Roman Empire, politics is a way to money and power. Self-service and not service, indeed.

Today, we are overextended economically and like nations which do so, become a nation of bad credit, one in debt and constantly defaulting.  That’s what led to the tumbling of our markets back in 2008.

Three periods in history have divided the nation: 1861 – 1865, 1960s and presently.  Social divisions have blinded a society which was once tolerant towards immigrants and minorities.  Today, we want to deport those who come to the U.S. in need. Americans have forgotten their virtues and substituted it for a false and disguised nationalism, when it’s underlined with racism.

Turning into something narcissistic and wrongful, when it shouldn’t.

What was the downfall of the Roman Empire towards its end?  Arrogance, prideful, lacking in vision.  The same vision which made it, also the lack of destroyed it!

Well, it’s certainly happening to America and Americans.  Once a visionary country is so diluted in its own arrogance and looking down on others, that it’s forgetting about the rest of the world and globalization. America cannot be alone against the world and needs to learn to cooperate with other economic-developing countries, and recognize their potential in the near future.

Inhumane treatment has also branded the country and it ought to be ashamed for it. From the incarceration of young children, the abuse of our African-American and Mexican populations and how badly the LGBTQ community has to struggle in this day and age for recognition.

I’d suggest that the United States of America takes a long hard look and learn from the principles it was founded upon.  Read a little more about Thomas Jefferson and what he stood for and never forget its history; whether it was by good deeds or past transgressions.  Not becoming disgusting, but an admiration to the world once again.