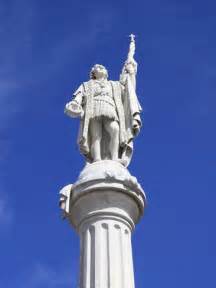 Many think of Columbus as a great man.  In much of our history books, he is.  However, there was a darker side to the man which history hasn’t often covered.  Here’s a quick look at his exploits and why he’s hated by the indigenous peoples of the Americas.

Reading through University authors like Howard Zinn, one person like myself had to be corrected on the mistakes, horrors and forgotten history.

One is the fact about Christopher Columbus (Cristoforo Colombo).

No, he wasn’t a Spaniard, but a man born in Italy.

To think on what he did is just incredible.  Coming from a position of low status and destitution, he rose to the ranks of nobility thanks to his adventures across the Mediterranean Sea and Atlantic Ocean.  He was a man of great vision, who did something amazing.  However, his conquests were more about land and people.

He was a man of ahead his time, who helped build the Spanish Empire and to what extent we truly know Columbus?

Because contemporary history has opened the books to the horrific facts about his life.

Yes, Columbus was himself a visionary, but he’s also considered a murderer of millions of indigenous peoples.  Numbers aren’t certain, historians estimate between 6-hundred-thousand to 4-million.  He enslaved countless and wiped out after his colonial exploits the peoples of Cuba, Puerto Rico, Haiti, Dominican Republic and Jamaica.  If you can’t believe me, look at the entire disappearance of the Arawak-tribes across the Caribbean nations.

Bringing disease and death at his wake.

Columbus is remembered for grandiose things done in his four voyages and he has to be viewed greatly in the historical context–for his desire to explore the unknown world.  However, he brought tragedy to everything he touched.

I can admire Columbus for the man he was, but he’s never somebody who we could live with in our present times.  With his prejudices and ignorance towards the natives of the new world.  People in which he stole their land, enslaved them, killed through disease and warfare.

After his death, nobody is sure where he ended!  Was it Cuba, Bahamas, Jamaica or Spain?  Scholars aren’t certain.  The closest thing to a mausoleum or whatever is left of him is in Santo Domingo, Dominican Republic.  Largest monument built in his honor.

Fifty-years after his passing, what did Columbus’ legacy bring?

Well, most of the original peoples from the Mayor Antilles had disappeared ‘thanks’ to disease, wars and enslavement.  When the Spaniards needed people to enslave and do their dirty work, they began getting their slaves from Western African countries like Angola.

Today, whether we visit Boston, Puerto Rico, Dominican Republic, Cuba, Colombia or Spain.  The legacy left by Columbus is very much palpable in Morros/Forts and his Statues, and there’s a bigger debate about his larger than-life persona.  Calling him the ‘Hitler’ of the 15th and 16th Centuries.

Was he good or bad?

In truth, famous personalities like Columbus we ought to never forget.

What he brought in culture, religion and language to the Americas.  But he carried the deep-seeded prejudices of his time by calling the natives ‘savages’, an appetite for destruction, conquest and an ambition for gold/glory.

By remembering him, we won’t allow other men or women for that matter to repeat these acts of cruelty and barbarity in our day and age.