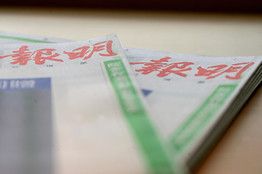 The abrupt removal of the top editor at trusted Hong Kong newspaper Ming Pao Daily has sparked concern among journalists and scholars that press freedom in this Chinese city is being further curtailed.

Staffers at the Chinese-language Ming Pao were told earlier this week that Chief Editor Kevin Lau, who held the role for just two years, is being replaced by a Malaysian now residing in Singapore, according to editorial employees at the paper. Ming Pao said in a statement that Mr. Lau will move to a new position to help develop new business for the group, without further elaboration. Mr. Lau declined to comment on Thursday.

Some 243 people, representing more than 90% of Ming Pao’s editorial staff, have signed a petition to urge the company’s management to cite its reasons for replacing Mr. Lau and to promise to uphold the paper’s editorial independence. Meanwhile, nearly 300 former Ming Pao staffers signed a separate petition expressing their concern about potential threats to Hong Kong’s press freedom.

The senior staffing change at the paper comes at a critical juncture for Hong Kong, as the city’s government and political opponents are in a tug of war on the future of democracy. At stake is a decision to be made over the coming months on whether members of the opposition will be permitted to stand for election to become the city’s leader. Though officially a part of China, Hong Kong has its own laws and regulatory institutions. According to Basic Law, the city’s miniconstitution, the “ultimate aim” in Hong Kong is to eventually select the chief executive by universal suffrage. Beijing has said that 2017 is the earliest point at which that could happen. Previously, the city’s chief executives have been chosen through an election committee largely stacked with pro-Beijing and pro-business interests.

Many Ming Pao journalists said they were surprised by the decision to replace Mr. Lau, given his short stint at the helm of one of Hong Kong’s biggest dailies. Mr. Lau had been groomed for the position by former chief editor Cheung Kin-bor, who held the job for more than a decade before his retirement in 2012. The journalists say they are concerned the company is under pressure because of the paper’s critical reporting on the Hong Kong government.

Ming Pao is controlled by Malaysian-Chinese tycoon Tiong Hiew King, who has palm-oil businesses in Malaysia and has invested in mainland China for decades. Mr. Tiong couldn’t be reached for comment.

In its reporting, Ming Pao has criticized some government policies and pushed for democratic reforms in the city. The newspaper also exposed several political scandals, including the 2012 revelation that both candidates vying for the city’s top job at the time had owned illegal structures.

While Hong Kong continues to enjoy considerable press freedom, some news commentators and journalists have said they feel increasing pressure to tone down their criticism of the Hong Kong and Chinese governments. In February last year, Chief Executive Leung Chun-ying demanded that the Hong Kong Economic Journal, another prominent daily, retract an article that he claimed defamed him. The paper later apologized.

“In this critical moment of political change in Hong Kong, it’s not sensible to replace the chief editor with a person who might not understand the local context,” said Sham Yee-lan, chairperson at the Hong Kong Journalists Association.