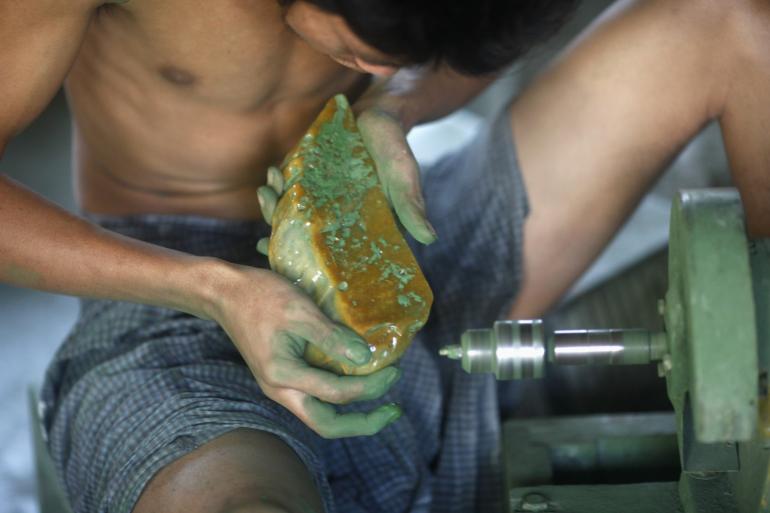 Hong Kong jade dealers have fallen on hard times, as concerns over a drying-up of jade from Myanmar cause prices to soar.

A few years ago, a quality piece of Burmese jade at trade fairs in China cost about $2,700, said Li Qi, a Chinese jade trader who owns a shop in Hong Kong, and a piece of jewelry processed from that stone could sell at 10 times the price of the raw material, the Irrawaddy, a Burmese newspaper, reported on Tuesday.

But these days, the trade has become far less profitable. Raw jade prices have skyrocketed so that merchants like Li can barely afford to purchase the rocks, while customers are turned off by the high prices and demand is falling.

Most of the world’s jade supply – as well as the best – comes from the small mining town of Hpakant in the conflict-ridden Kachin region in Myanmar, where thousands of workers bring up jade in hazardous conditions, and many turn to injecting heroin, creating in the process the world’s highest HIV infection rates.

About half of Myanmar’s yearly production of jade, which is worth about $4.3 billion, however, trickles over “unofficially” to China. For 2012, the official exports of Burmese jade stood at only $34 million, which, even taking into account Myanmar’s domestic consumption, is far too low.

The reform government hosts several national gemstone emporiums each year, but jade producers prefer not to sell their products at these emporiums as they would be subject to high government tax rates up to 30 percent of the value of their sales.

And over the past decade, as the spending power of Chinese consumers increased, jade prices too have risen. In response to the demand, big jade producers are now using sophisticated technology to speed up production, but that may not be a good thing.

“All the hills and mountains you see produce jades and precious stones,” said Yaw Han, a Burmese jade merchant, standing atop a mountain in the jade mining region, according to the Irrawaddy. “If we continue to find jade through traditional hand-digging, I think that we can find jade for the next generation. But, if companies use modern technology these mountains can be gone within 15 years.”