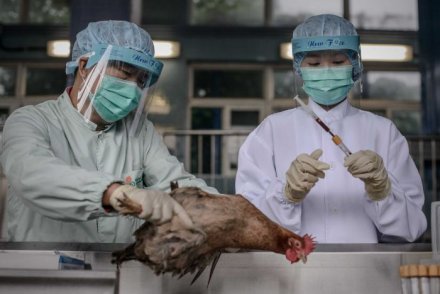 Hong Kong Centre for Health Protection controller Leung Ting-hung told reporters at a press conference a 65-year-old man has been infected with the virus and is in a critical condition.

“The man with underlying medical conditions…presented with fever, cough and shortness of breath since January 3,” said Mr Ting-hung, adding that he was transferred to intensive care Tuesday as his condition deteriorated.

Initial investigations showed that the man had not been directly exposed to live poultry, but had probably contracted the virus outside the city.

“Our initial investigation has revealed that the patient traveled to Lowu, Shenzhen with a family member from January 1 to 2,” Mr Ting-hung said.

“He passed by a wet market which sold live poultry in Lowu on January 1.”

Mr Ting-hung also said that the patient may have “passed through” the entrance of a government building complex containing a wet market in Hong Kong.

He did not enter the market.

The patient’s relative has remained symptom-free and has been put under quarantine for 10 days.

It came as China reported its first death from the H7N9 virus for the year, after a patient in the southern province of Guangdong died of the disease on Monday.

An 80-year-old man died on Boxing Day after he was infected with H7N9, Hong Kong’s first death from the virus.

The man was the second reported case of H7N9 infection in the city after a 36-year-old Indonesian domestic helper was diagnosed with the deadly virus on December 2.

Hong Kong is especially alert to the spread of viruses after an outbreak of Severe Acute Respiratory Syndrome (SARS) swept through the city in 2003, killing 299 people and infecting around 1,800.

The H7N9 outbreak began in China in February 2013 and reignited fears that a virus could mutate to become easily transmissible, potentially triggering a pandemic.

Official statistics compiled by China’s health ministry show that by the end of October last year there had been 136 H7N9 cases and 45 deaths in the outbreak which began on the mainland in February.