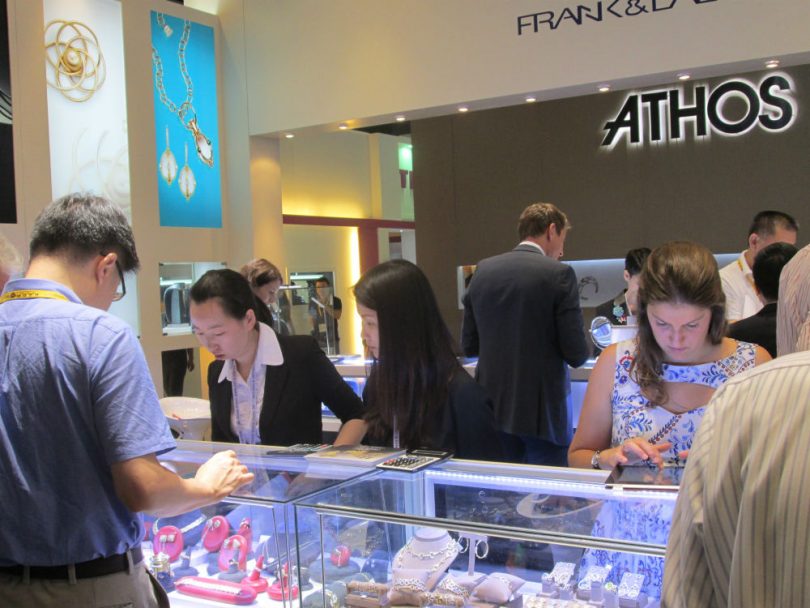 The momentum began with the Las Vegas jewelry shows in June and continued with the VicenzaOro Falljewelry show a week ago in Italy. It now appears to have grown full steam with the September Hong Kong Jewellery & Gem Fair.

It’s been a rough ride for the jewelry industry since the global economic downturn and the talk here in Hong Kong is that this is the best show since the recession hit.

The world’s largest fine jewelry tradeshow is held at two venues: The Asia-World Expo Centre, (September 11 – 15) for raw jewelry-making materials and jewelry-making equipment, and the main show for finished jewelry at the Hong Kong Convention & Exhibition Centre (September 13 -17). I’ve spent four days at the show so far (one day at the raw materials event and three days at the finished jewelry show) and nearly all exhibitors have expressed as much optimism and excitement as I have seen in my 13 years covering the jewelry industry.

For example, there was talk of a coral dealer at the Asia-World Expo who sold 80 percent of his inventory to other exhibitors a day before the show opened. On opening day at the HKCEC, several vendors and buyers were still conducting business after the show was closed.

Myriam Gumuchian, owner of the fine jewelry design firm, Gumuchian, said at the HKCEC that she has been busy throughout the first two days.

“It’s my second year of the show and it’s been much better than last year,” she said. “It’s non stop.”

Gumuchian said her most popular item by far is the “Ring Cycle.” It’s a ring that with the press of a button becomes a bracelet. It’s available in 18k yellow, rose and white gold and either in diamond pave or a hammered-gold finish with a diamond center stone. As she was showing me the ring a female Japanese buyer gasped with joy when she saw how it worked.

Evert deGrace, Frank & Label China business development director, said this is the second year the company has been providing this space at the September Hong Kong fair. This year, possibly to accommodate approximately 100 new exhibitors, the company had its booth size cut in half. Looking at the crowd of buyers, deGrace said, “We really could use the extra space.”

The new exhibitors bring the total number of vendors at the fair at both venues to 3,633 from 48 countries. Officials from UBM Asia, which owns and operates the show, have estimated that 52,000 buyers will visit the show but from looking at the registration areas on opening day at HKCEC and from reports on the floor, they may have underestimated. Regardless, the number of exhibitors easily cements its place as the world’s largest fine jewelry show.

Also to accommodate new exhibitors, show officials moved antique and estate dealers in the last available space in the HKCEC, which is really a foyer. No one was complaining as buyers were crowding into the spacious area.

Edward Faber, owner of Aaron Faber Gallery New York, which specializes in vintage watches and jewelry, said early during the opening day he made a number of sales. Among the biggest sellers were vintage Omegas, Patek Philippe pocket watches and erotica timepieces.

This is Faber’s third time exhibiting at the show and he said he is impressed with how quickly Asian buyers have taken to the nuisances of fine watch collecting.

“They’ve quickly become more sophisticated,” he said. “It’s surprising the comfort level they have when it come to style and design. It’s a good thing.”

One of the big successes I’ve seen at the show is an area called “Designer Avenue.” It’s located on the mezzanine level of the HKCE. It’s basically a balcony-like space that houses a row small independent jewelry designers and artists, providing them with inexpensive booth space. Artists from every continent have their own separate space that was constantly filled with admirers and buyers from all over the world.

Etienne Perret, a US based independent jewelry designer who exhibited in the area, said buyers from Russia, China, Australia and several eastern European countries have expressed interest in his gem-ceramic designs.

“The world is here and people seem to be buying,” he said. “People in the US have no clue how much money there is in Russia, China and even places like Iran.”

“All appointments have showed up,” he said on the second day of the HKCEC portion of the show. “So far it’s been great.”

My first day at the show was spent at the Asia-World Expo Centre during its second day. This is where diamonds, colored gems, pearls and other jewelry making materials and equipment were being sold. Most exhibitors I spoke with were generally happy with the show but aired some complaints.

For example, fancy colored diamond dealer, Francis Errera, said the first day of the show was “very, very busy” with “high-quality” clients from all over the world but on the second day traffic trailed off.

One reason he said was because his clients, primarily luxury jewelry brands and investment banks, shortened their time at the fair due to religious holidays.

“I think major shows like this one should be held outside of any important holidays,” he said.

Overall, Errera said the positive sales reflect the growth of the overall economy. “America is getting much better,” said the French native who moved his business to Hong Kong several years ago. “Japan is getting better as well but Japan is always strong for fancy colored diamonds. China is good.”

The only economy that is lacking growth is Europe, he said, which also reflected his business at the fair, as only one representative from the continent came to his booth during the first two days.

Meanwhile, in the pearl section, Chi Huynh, owner of pearl company, Galatea, was selling its loose sculptured freshwater pearls for designers and manufactures. His booth was crowded.

“Designers love them,” he said. “I don’t think wholesalers know what to do with them.”

He said that in addition to his loose pearls, customers were interested in his finished jewelry and to accommodate these people he is considering opening a booth at the convention center.

“I was surprised by the reaction,” he said. “So next year I might split the booth to two places.”