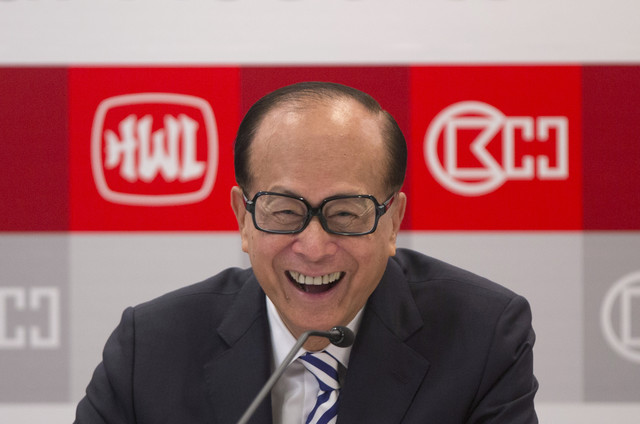 Home sales in Hong Kong, where Cheung Kong is the second-biggest developer, will continue to be affected by government measures, Li, 85, said yesterday in statements after the company reported a 13 percent decline in first-half profit. Unit Hutchison Whampoa Ltd. posted a 23 percent advance in net income, boosted by investments in power stations and energy.

“They’ve taken advantage of the downturn in Europe to invest in projects with good returns,” said Louis Wong, a director at Phillip Securities H.K. Ltd. The infrastructure unit “has been investing in power, utilities, and water companies. That is its growth strategy.”

Hutchison Whampoa, which also runs ports and retailers, surged as much as 3.5 percent, the most in three months, to HK$90.80 in Hong Kong trading. The stock, with the biggest percentage gain on the benchmark Hang Seng Index, traded at HK$90.75 as of 9:35 a.m. local time and has gained 12 percent this year.

Li, nicknamed “Superman” by the local media for his investment prowess, forecast in 2007 that China’s stock-market bubble would burst and in 2009 predicted the rally in Hong Kong home prices. He is the 16th richest man in the world with a net worth of $27.1 billion, according to the Bloomberg Billionaires Index.

“Each of our major operating divisions will continue to invest and expand,” Li said in the Hutchison Whampoa statement yesterday. “The group will continue to grow in the second half of 2013.”

Hutchison Whampoa’s net income rose to HK$12.4 billion ($1.6 billion) in the six months through June from HK$10.1 billion a year earlier, it said yesterday. That compares with the HK$10.8 billion median of three analysts’ estimates compiled by Bloomberg News.

3 Group Europe, which runs mobile services, “will increase market share,” Li said in the statement. The energy business is developing a gas project in the South China Sea and an oil sands project in Canada, the company said.

“Whilst uncertainty will remain a challenge for the second half of 2013, major economies are showing signs of stablisation and gradual recovery,” Li said.

“Its profit growth potential in Hong Kong is quite limited,” said Ka Kei Lam, an associate director at Redford Securities Ltd. “If it wants to increase its earnings per share and dividend payout going forward, investing abroad is probably a better deal.”

Cheung Kong and rivals are selling the fewest homes in almost five years as the Hong Kong government imposed extra transaction taxes and tightened mortgage lending to quell concerns of a real estate bubble. To make up for slowing sales, Li has been trying to offload assets including hotel rooms and shopping malls.

Earnings from property sales at Cheung Kong, which sold the most homes among Hong Kong developers in the first half, fell to HK$3.8 billion from HK$6 billion, the company said.

“The first half results of the group reflect the continued difficult operating environment,” Li said in the statement. “The local property market will continue to be subject to external economic conditions and the development of housing policies.”

Li, who opened a plastic flower factory in Hong Kong after World War II, began investing in the city’s real estate in 1967 after riots from China’s Cultural Revolution depressed prices.