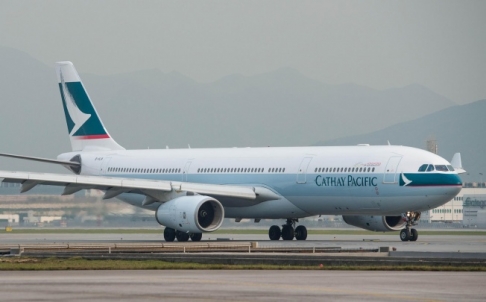 Cathay Pacific Airways is considering installing “self-boarding” gates at the airport, which would speed up boarding procedures and improve its on-time performance.

The automatic boarding gate, an advanced version of the gates used at MTR stations, will allow passengers to board without having to undergo a manual document check by ground staff.

Face-detection cameras at the checkpoints will recognise the passenger using biometric technology, freeing up airline staff.

“We are looking at the project along with the Airport Authority and we’ll finalise the supplier [of the technology] in the next 12 to 18 months,” Cathay’s chief operating officer Ivan Chu Kwok-leung said on the sidelines of the airline company’s annual shareholders meeting yesterday.

The International Air Transport Association aims to enable secure and “fast travel” procedures for 80 per cent of global air passengers by 2020. “Fast travel” is defined as 10 minutes from check-in to duty-free shops and 30 minutes for the passenger to be on board and ready for take-off.

In an experiment conducted by Lufthansa on an Airbus A380 aircraft at Frankfurt Airport, the airline found that using four self-boarding devices and two ground staff enabled it to halve the embarkation time for about 450 passengers to 20 minutes, said Lars Rosenberger, the head of business management airport and airline solutions of Kaba Gallenschutz, a boarding gate technology company hoping to win the contract to supply the boarding devices to Cathay.

Kaba is helping set up similar self-boarding programmes in Singapore and Australia.

Separately, Cathay said it was benefiting from the weaker Japanese yen, which helped the company achieve double-digit growth in passenger traffic to Japan.

The year-on-year growth in passengers flying to Japan came from both the Hong Kong and Southeast Asian markets, Chu said.

Traffic from mainland China to Japan was still down as a result of Sino-Japanese tensions over disputed islands in the East China Sea, he added.

Chu said the airline had seen a 2 per cent year-on-year increase in demand for flights to the United States and Canada.

From July, the carrier will operate 21 flights per week to Los Angeles, up from 17 flights now.

It will also increase the number of flights to New York per week to 28, from 25 at present.

The airline will add a fifth daily flight to London from June 25.