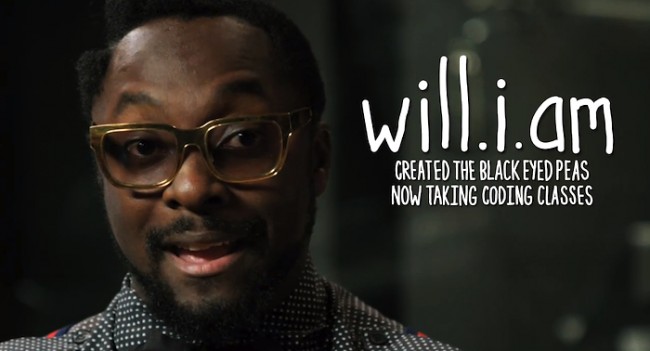 Non-profit organization code.org has gathered together a parade of big names from the world of tech and entertainment in an effort to persuade young people – or anyone for that matter – to get coding.

Mark Zuckerberg, Bill Gates, Jack Dorsey and others from the tech industry appear in code.org’s video alongside the likes of Will.i.am and Miami Heat’s Chris Bosh to talk about their coding experiences and how it can open new doors in a world where “computers are everywhere.”

The six-minute production was directed by Lesley Chilcott, known for her work on documentaries such as An Inconvenient Truth and Waiting for Superman.

In an effort to demystify the process of coding, Dropbox’s Drew Houston compares it to playing an instrument or sport. “It starts out being very intimidating, but you kinda get the hang of it over time.”

Girl Develop It’s Vanessa Hurst says you don’t have to be a genius to code, just determined. And that’s the underlying message running through the video – anyone can code if they put their mind to it….plus a segment about how tech companies make their offices “as awesome as possible” to try to get the very best programmers to work for them – cue shots of people skateboarding down corridors, workers playing on drum kits and video games, employees sunning themselves on the top of office buildings and canteens with people enjoying free tasty-looking meals.

The video also emphasizes the perks and casual vibe of working at a deep-pocketed tech company, where employees get free food, work barefoot and skateboard around the office.

“The programmers of tomorrow are the wizards of the future,” says Gabe Newell, co-founder of video game developer Valve. “You’re going to look like you have magic powers compared to everybody else.”

The clip already has been viewed more than 2 million times on YouTube. Code.org hopes to get it shown in schools across the country.

Check out the video below.