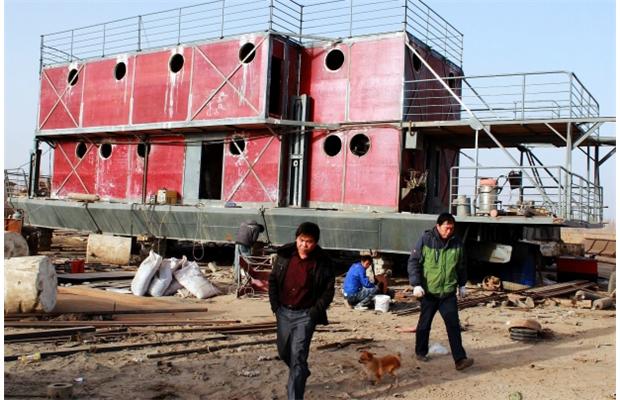 Chinese man starts building a Noah Ark like vessel because he was told the end of the world is coming on Dec 21, 2012. (Source: AP)

Do you believe doomsday is coming on December 21? Believe it or not, you may get arrested in China for spreading this kind of rumor. Up to now, more than 400 people have been arrested in China as part of a “pre-Apocalypse” crackdown on doomsday rumour-mongers.

According to China’s state media, at least 93 people have been arrested in the lead-up to Dec. 21, which will mark the end of the 5,125-year “long-count” Mayan calendar and, according to some, the end of the world.

The Global Times reported Monday that 37 cult members had been arrested in Qinghai province for “brainwashing” people “into believing the end of the world is near.” A police source accused the group of predicting that “the sun will not shine and electricity will not work for three days beginning on Dec. 21.”

One line from a text message that was allegedly being spread by the group, reads: “Great tsunamis and earthquakes are about to happen around the world.”

Thirty-four people were arrested in Fujian province and four in Chongqing. The state news agency Xinhua said two of those men had been caught using a loudspeaker to “proclaim the end of the world.” There were also arrests in Shaanxi and Hubei provinces.

“Because China has no established religion, people looking for a way to set their minds at ease may turn to cults,” said one of the protesters. “People don’t believe in what the government says, so they may wind up believing in wild rumors.”

The doomsday, also known as the 2012 phenomenon comprises a range of eschatological beliefs according to which cataclysmic or transformative events will occur on 21 December 2012.This date is regarded as the end-date of a 5125-year-long cycle in the Mesoamerican Long Count calendar.Various astronomical alignments and numerological formulae have been proposed as pertaining to this date, though none have been accepted by mainstream scholarship.

A New Age interpretation of this transition is that the date marks the start of time in which Earth and its inhabitants may undergo a positive physical or spiritual transformation, and that 21 December 2012 may mark the beginning of a new era.Others suggest that the date marks the end of the world or a similar catastrophe. Scenarios suggested for the end of the world include the arrival of the next solar maximum, an interaction between Earth and the black hole at the center of the galaxy,or Earth’s collision with a planet called “Nibiru”.