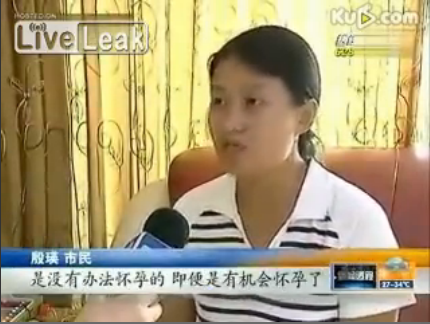 The wife never got pregnant even though the couple has been married for three years.

They went to see a doctor for an explanation and were told the wife was still a virgin, which doesn’t surprise them at all because they thought sleeping side by side was enough to get the wife pregnant. The husband has a doctor’s degree and wife a master’s. Both are from Shanghai.

They believed that the sperm would simply “fly around” at night.

Obviously, over one billion Chinese people have discovered the secret to pregnancy; and yet this story has brought renewed attention to the lack of sex education in the mainland.

Before marriage, people in China go elementary school, middle school, and then college. They get a job, then get married to someone, and take the mandatory pre-marriage physical exam. There are many steps out there but it lacks of sex education. As a result of that, this couple was honestly clueless, which should really shock people.

The video is from a site called LiveLeak and it stands out as a rare and extreme example of the consequences of poor sex education.

On the other side of the border, the case described above is unlikely to happen in Hong Kong. Sex Education was first officially introduced to the secondary schools of Hong Kong in 1986 when the Sex Education Guideline was issued by the Education Department. Over the past years, even though more sex education programs were implemented in schools, the overall result cannot be considered as satisfactory. There are many causes and one of them was due to the lack of systematic training for sex educators according to a paper by the Asian Journal of Counseling.

Sex invariably leads to the teen-pregnancy problem. In Hong Kong, we have about 800 such cases every year, and most cases end in abortions, from which the physical and mental shocks brought to bear on the girls were handily ignored. And it is sad to read from newspaper reports that every year about half a dozen newly-born babies are abandoned in dark allies or filthy dumps.