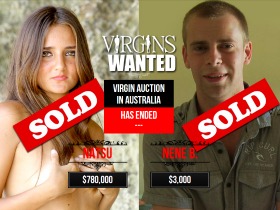 The virginity of Brazilian citizen,  Catherine , 20, was finally sold. The student became known in September, when she offered her first sexual experience at an auction site. The buyer will pay about US$ 780,000 (HK$ 6 million).

The bidder was identified only as Natsu and is a resident of Japan.

The offer was made on Wednesday, just before the auction closed. There were 15 bids in total, the bidders being from Brazil, United States, Australia, India and Japan.

Russian virginity was sold on the same site

The Russian Alexander Stepanov, 23, auctioned his virginity on the same site.

Identified as “Nene B.”, the person is from Brazil and the gender still unknown – Alexander received seven other bids, by four men and three women. The buyer paid US$ 3000, equivalent to just over HK$ 23,340. Alexander claims to be virgin and heterosexual.