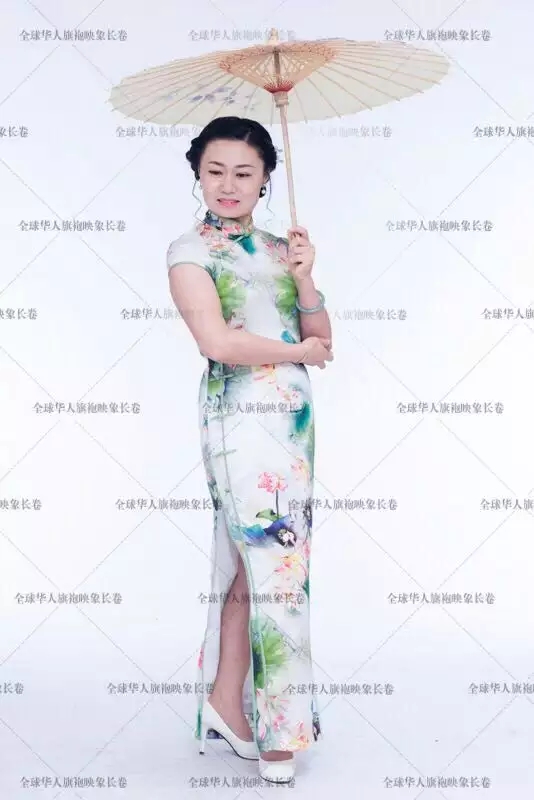 Lady Cheongsam is going on 100

It was a parade of cheongsams, when these ladies in these classical dresses did a traditional-Chinese dance for the crowds to enjoy here in Guangdong.  It was when, as magical as it felt, the ladies waved their fans and did a twirl for the audience to be held in a trance.  This is the power of this dress almost 100-years later!

The century is almost up and an anniversary is in the wind all over China for the birthday of the cheongsam.  Recognized as one of the oldest symbols of beauty in modern and contemporary China.  It began with the loose fitting ‘changpao’ during the Qing Dynasty three centuries before and later during the 1920s Shanghai, it became the body-hugging dress we know as today.  It was the fashion statement of the early twentieth century and it made a splash in the fad world with its short-tight version around the Shanghai circuit and longer versions along the capital of Beijing.

Notably manifested in gorgeous silk, the cheongsam or as it is known in Chinese-putonghua, ‘qipao’ came to pass and never go out of style.  The colors of red and black are still part of the taste for most Chinese females.  Focusing on the chest embroidery and knots that give it lovely closure from the neckline to the right side.

The dress itself is made ‘fit-to-wear’ and exalt elegantly a female’s anatomy.  Beautiful in every way and to never cheapen what a woman stands for, ultimate elegance in the virtues of Chinese society.

Presently, the popularity of the dress have never waned.  It continues to inspire people to wear it during: ceremonies, for weddings, as company uniforms and gatherings.

The important part of this is the timeless honor and tradition of wearing one.  It is just sexy and what better way than to see a female walk, as her hair cascades down the dress and she says, “This is me and its the part in the beauty of my culture!” What a timeless tradition, I might add!

Why do I like the cheongsam?  Well, it evokes the memories of my childhood back in Chinatown, New York City.  When uncle Joe and I would go see a Kung Fu or Bruce Lee movie.  It was during that scene, when all the females gathered and showed the beauty of this great dress.  It was just a pleasure to watch, indeed!