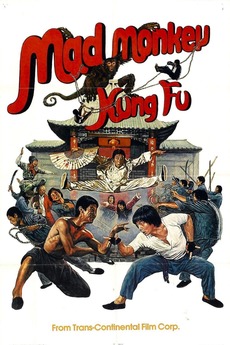 With high flips and somersaults, this high-impact drama begins with a Peking Opera performance, where local gangsters come to see the show. The Mad Monkey Kung Fu master Chen (Lau Kar-leung) is a cocky performer, and while dealing with the local mob boss gets too high and mighty for his own good.  After a feast and drunken bout, he begins to challenge all those around him.  Too arrogant to know when to stop and too drunk to know when to quit, he is beaten senselessly by mobsters when he is framed for supposedly sleeping with Tuan’s (Lo Lieh) wife. Tortured, his hands are broken to the point he can’t do anymore the monkey-style Kung-fu.  On top of his humiliation, his sister is held into sexual slavery (Kara Hui).

From the events which take place, leaves this famous performer literally ‘out in the cold’. This young master is left poor and destitute, he has to take to the streets to survive.  As a local street performer, he has to deal with gangsters all over again who bully him and kill his performing monkey.  In anger, he tries to fight back and soon realizes with his injuries, he cannot fight Kung-fu the way he used to.

Therefore, he takes on a young thief, street performer (Hsiao Ho) and trains him in the Kung-fu Monkey style.

This high-action packed drama holds one truth typical of Shaw Brothers’ films, it is one for self-defense and to fight injustice.  It has elements showcasing the Chinese culture: from the Peking Opera theatre with its Hong Kong display, to the Chinese architecture in the Song Dynasty style, the way it shows the lovely patterns of the cheongsam for male-female alike and the way multiple dishes are sprawled gorgeously across the red-mantle on the table during certain scenes.  However, the film holds to a fine line that almost glorifies revenge.  Sometimes with the overacting which was very traditional at the time.  The film is a classic in every way and a must see amongst the great movies in the Kung-fu genre.  The acrobatics are just stunning.

The purpose is to stop this gang of thugs from bullying him and his student. The training is intense, almost to the verge of madness.  The Monkey style is showcased as a superior technique, but the story also warns about becoming too overconfident in one’s ability.  As the master, his young protege also decides to pick a fight with the local gangster and in the beginning, is winning against the gangster’s crew.  But later, just like his master, the young student and former thief takes a beating.  In typical fashion, the student and master begin their intense training, developing a better version of the monkey system.  After his training, the Monkey again returns to take revenge for himself, his master and the courtesan killed in a fight.  This time he is more than ready and up for the challenge.  The audience might think for moment that the student goes at it alone and when he’s taking a beat down, suddenly the master shows-up!  The climax of the film is more than traditional in the Shaw Brothers’ style, when student and master must fight the evil gangster’s powerful Kung-fu.  The master, too hurt to continue the fight; so the Monkey must go at it alone and defeats the gangster by himself–killing him in the final scene.

Who is the star and director of this movie?

Why is the monkey style important in traditional Chinese Kung-Fu?

What is the favourite colour in China?

What is the architectural style on the set?

Which other movies did Kara Hui went to star in?

In this critique, the movie was given a 9 out of 10.  The content is grand, and in every way a true Kung-fu classic.  Took one point off for the desire for revenge.

‘Mad Monkey Kung Fu’ is a true classic from the Shaw Brothers, with one thing in mind, revenge!