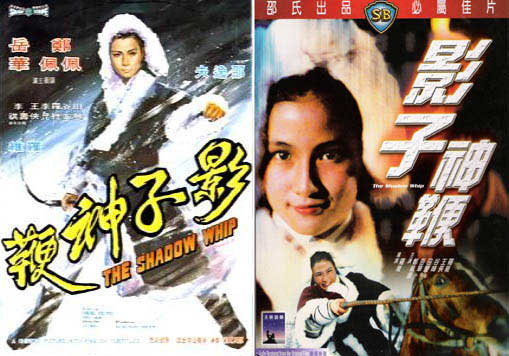 The movie begins beautifully with a traditional song, which is part of the Northeastern Provincial culture in China.  A song dedicated to the young ‘Shadow Whip’.  An expert on the ancient-whip weapon and used sometimes cruelly as a flogging device. The confrontation is unavoidable between merchants and armed bandits.  Which by the second scene becomes intense, when three armed men with swords enter an establishment and these men are up to no good.  The merchant who was struck in the face by one of the three armed men wants justice for losing ‘mianzi’ (面子- face).  He enters the establishment and an argument ensues, in which another swordsman in good nature has to intervene to protect the load-mouth merchant.

‘The Shadow Whip’ (Cheng Pei Pei) enters and saves the merchant who was looking for a fight.  Already she shows the masterful ability with the whip and how she is extremely agile, as one of the bad men tries to throw daggers at the merchant and her. As she, of course, avoids these deadly weapons, and from here on there will be an inevitable confrontation.

Another mysterious-older swordsman (the leader of the bandits) later enters the picture, when the Shadow Whip and the merchant are at an inn. In this inn hides Shadow Whip’s father, who is also an expert in the use of the whip.  Turns out, the older swordsman’s is a bandit and assassin!  They both duel it out in the snow.  The killer cannot get the Whip’s father, as he escapes to battle it out another day.  The load-mouth merchant is later killed and the Shadow Whip goes after the assassins who have swords and spears, the same who attacked her father.  In a scene where her mettle is put to the test, her fighting skills are superbly defined against her attackers. The Shadow Whip as her father prove to be a formidable weapons against their spear-wielding enemies.  At the inn, her father stays behind to fight off their enemies, as the Shadow Whip rides off for help.  The three heroes: father, daughter and mysterious swordsman reunite, but are fighting too many enemies (16 in total) and have to make a run for it.

The lesson, even with the best technique, nobody can go against overwhelming odds.  Turns out later in the story, the Shadow Whip’s father is not her father, she was orphaned by the same band of bad guys who came to the village and destroyed her world.  Her adopted father, the Shadow Whip and mysterious swordsman will do battle.  Finalizing with the three winning the day!

The movie has a great start, but in some of the scenes [its beginning], the actress appears tired and sluggish.  Almost clumsy in her movements.  As if still out of character.  Later, as she becomes in depth with the character, the fight scenes are magical.  The way the whip is handled, specially against sword and spear attacks.  Indicating that, any weapon in the hands of a well trained ‘Kungfuist’ can be as deadly as the Kung-fu techniques learned and demonstrated.  The movie marvelously follows in a traditional sphere; as the fighters do high jumps across the rooftops and forest in a style later perfected gorgeously in ‘Crouching Tiger, Hidden Dragon’ and ‘The House of Flying Daggers’.  I gave this film a 7 out of 10 for its beginning.

‘The Shadow Whip’ is an action packed movie, with the actress Cheng Pei-pei wielding the whip masterfully.  The fight-flying scenes are just gorgeous in sequence.