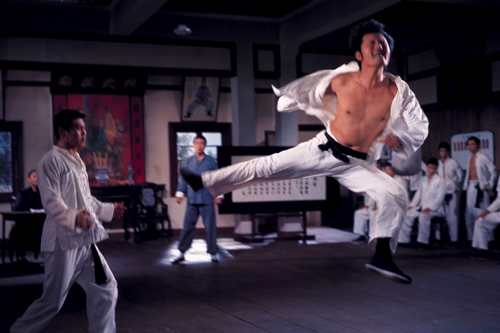 When a talented student of Kung-Fu is assigned to another school, already local gangsters want to control a piece of the action.  How will they do this? The gangsters will ask for help from Japanese-assassins to assist them in eliminating the competition.  This student is great in Kung-Fu and the bad guys know this ‘King Boxer’ must be eliminated–so they can win the future tournament.  Therefore, by winning, these gang lords can control the streets, Kung-Fu schools and revenue.  However, there is an inside student in one of the schools who informs on his master and classmates to the local thugs.  He snitches on his classmates, also he is in need for power and dominance with this gang. The King Boxer is cornered one day on a road and beaten senselessly.  The Japanese-assassins break his hands, but don’t kill him.  Big mistake!  By allowing this great-Chinese boxer to live will be the unraveling of the gangsters themselves.

Lo Lieh as the King Boxer/Five Fingers of Death/Chao Chih-Hao; Bolo Yeung is Pur Tu-er/Mongolian Fighter (he starts as a gangster and later changes sides to help Chao Chih-Hao); Hsiung Chao is the main Japanese assassin and Judo-master Okada; Ping Wang as Yin-Yin – Chao Chih Hao’s love interest; Mien Fang as Sun Hsin-Pai is the master of the school where Chao Chih-Hao is transferred to develop his ‘Iron Fists’; Feng Tien is Meng Tung-Shun as the evil gangster hurting the locals, affecting their livelihood, and he only wants to keep Kung-Fu in control for himself and his gang.

Gangsters want to control the action and Kung-Fu in the area.  So they begin hitting hard different schools to control and terrorize people with Kung-Fu. They will not only use Chinese, but Japanese-assassins to kill off the competition.  Starting with the killing of a great master who trained the King Boxer.  Martial Artists are attacked, one student is killed and another is maimed (the informant) when he loses his eyes in a fight!  It all will lead to a climax when the King Boxer recuperates from his injuries and runs back to challenge those gangsters in an tournament to see who rules in Kung-Fu.

The action sequences are rather gruesome when blood is spilled; specially when the fights are to the death!  Fighters getting stabbed, losing their eyes and there is even the decapitation of the Mongolian Fighter.  The fights are continuous throughout the movie, but every fight scene is necessarily escalated to get and focus on the brilliant finale.

The movie sustains itself in unimaginable cruelty.  This has a purpose in the action-drama, it shows a cruel part of history; China and Japan fought two-bloody wars. Specially on Chinese soil, the Japanese-agents/army performed untold horrors on the local population.  There were people who were beheaded or maimed as part of the control over the people.  Gangsters or informers cooperated with the Japanese to be in their favour.  These were the common trends of past events.  The film shows that wonderfully, but it also demonstrates it in excess.  This motion picture doesn’t only try to bring Kung-Fu forth, but also Judo is brought to light stylishly to enjoy a new era of martial-arts cinema.

This film came out in 1972 to a brand-new style of cinema, known to most as ‘chopsocky’ (slash, bloody, killing, very-violently messy in a lot of the martial-arts scenes).  This form did not fail to deliver in the 114 minutes of running time.  The enjoyment of the film is totally grand and therefore, I gave it a 10 out of 10 as far as masterpieces are concerned.  Certain elements about history and martial arts should be understood before watching the film.  If not, the viewers can easily get confused.  Rarely I give such a rating, but the film captivates from beginning to end, nonstop!  The action is enthralling and just pulls the viewer in.