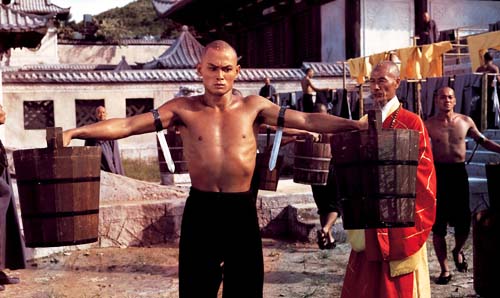 Shenzhen, China (10 December, 2019) – Decades ago, actually 41-years ago, the Kung-fu classic, ‘36th Chamber of Shaolin’ came into theatres and it was a runaway-blockbuster hit!  This marvelous style of cinematography was so popular that it was translated into several-dozen languages.  This flick made Gordon Liu a superstar and household name.

While viewing the film recently, my recollection took me back to a sweeter time. When I was conversing with an old friend back in Puerto Rico, Violeta. She was one of my best friends.  But what she left me with was her wisdom and insight about the film.  What she gave me was the desire to come to the Orient, experience Kung-fu and indulge into the Chinese culture.  This was her amazing gift to me!  This family matriarch told me about this beautiful piece of celluloid.  This movie was not only about Kung-fu.  There were lessons into it, like the chambers which a monk had to pass!  The movie went around the world and it represented [for those who watched the film] a part of their lives.  This filmography went on to inspire people for generations.  From my old-friend Violeta who isn’t with us anymore (she passed away in 1995), myself and it even inspired the success of America’s top rap group, the Wu-Tang Clan.

That’s why I wrote about this subject.  It’s a remembrance to never forget old friends, have loyalty or learn about it and honour Kung-fu for what it is: an art of peace and not necessarily one for war!  In this same way, the movie demonstrates those same feelings in this nearly two-hour inspirational lesson (1 hour and 55 minutes).

This motion picture was about a young man (San Te) who was seeking revenge.  How he went from seeking petty-payback to his conversion to Buddhism, becoming a monk and how he evolved into a greater human being.  He was like an onion, which needed to peel away the layers to become a better concept of himself.

Violeta went on to explain the synopsis in a simple way which my young mind could easily comprehend.  What she was trying to tell me in her own simplicity was, “God works in mysterious ways!” Actually, a person doesn’t have to believe in anything, but what happened to the main character was nothing but tragic.

The main character experienced the death of his sister.  After, he was on the run, persecuted by the Ching officials and Manchu military from the Imperial Court.  His last place of refuge was a Shaolin Monastery.  There he was accepted to learn Kung-fu.  His first lesson was to sweep the floors.  Therefore, he needed to learn how to be humble.  He rapidly went through the first-10 chambers.  San Te was certainly full of enough hate and revenge to want to burn the world.  And with revenge, “You better dig a grave for your enemy and one for yourself!” But after a while, he came to realize that Kung-fu wasn’t only about fighting, self, selfishness or self-absorbance for that matter.  Through the process, San Te learned about camaraderie.  This was his second lesson in martial arts.  There was a gorgeous scene in the movie, when he helped one of his fellow practitioners with the buckets of water.  You have to watch it to understand it!  The latter exercise was meant to create arm strength; however, while holding the buckets out with arms extended, daggers were placed under his upper arms.  If San Te or any of his comrades brought their arms down, they would painfully cut the area of their armpits.  From here, San Te was transformed in the next three years into a supreme Kung-fu artist. But he had also achieved a certain wisdom and peace through his journey.  This was the third lesson that this drama was trying to convey.  Towards the end of his training and on his last chamber, San Te must select his favourite weapon and fight a Kung-fu master to become a full monk.  However, he cannot receive more than three cuts or any life threatening injuries.  Here, this young man learned the fourth lesson: Kung-fu is only for self-defense and not to harm others.  By the end of this motion picture, San Te makes it and then he has learned his fifth and final lesson in the way of nirvana.  While this young monk went on to train many others, he learned that Kung-fu was meant for justice and not as a weapon of hate nor to get even.

As I mentioned before, I recently saw the film once again.  But this time something was missing, my good friend Violeta sitting next to me and guiding me with her wisdom.