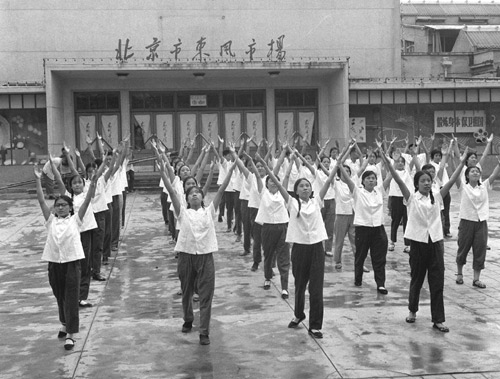 Working on a laptop sitting down for eight to 12-daily hours, its bound to have an effect on the gut.  Well, some Chinese have begun to expand on the waistline.

Basically to avoid this, there’s a need to get out there and once again focus on a tradition developed in China back in the early 1950s.

Back in the day, state owned companies began this routine during an approximate 40- minute period.  This interval was performed in the morning, usually after breakfast, when the stomach had settled-down and before the 10 a.m. break time.

For those youngsters in their grammar school years, the students have to this every grade for 12-years before they reach university.

This tradition in terms is one which should never be broken, that’s why after the 1990s, radio calisthenics was reintroduced again into this new-capitalist society.

Employees will have the opportunity to get those juices flowing, refresh the mind before starting the day at their desk and working on the computers.

Because for the metabolism and science, it’s suggested by doctors to at least stand a total of three-hours a day to help the body movement and avoid gaining weight!

Here comes into the mix radio calisthenics to help start the day positively. Since human begins should exercise at least five-times a week for more than 30-minutes; this system is perfect for the body!

What’s so lovely, even cute, is the women will elegantly do the calisthenics in their high-heels and move along: to strengthen the body, beautify the legs and flatten their tummies.

In a professional career which will typically span 30-years, radio calisthenics is still practiced throughout China for millions of people to enjoy!  It’s invigorating and has made a comeback competitively and furthermore, at an international level.

I’d wish more Western societies could adopt to this method.  It think it’s really smart, and one of the positive things to take and imitate from China.  Better yet, when it can adapt to any age, young or old.

That’s the reason why, many retirees began with Square Dancing in the local parks and plazas after their retirement during the 1980s.  It was another form of radio calisthenics in a hip version.

To continue with this traditional exercise and introduce into their routine Chinese-pop instead of the old-military styled music for marches.

What’s better than doing calisthenics and square-dancing together, one in the morning and the other in the early evening.  Here’s the benefit of a full workout: to remain young, active and shed those pounds.

So common on, get out there, do your routines to better enjoy the day and not get fat!