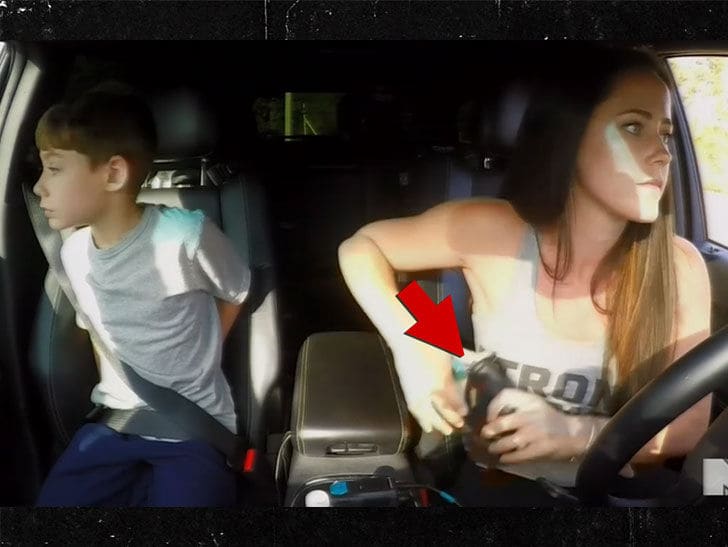 Yet again, the Jenelle Evans tape only shows one thing…

If you haven’t seen the video, well, it shows in a bad way what America is facing presently. These pistol-packing people who shouldn’t be on the road and overreact to every little thing which crosses their path!

When I saw the Jenelle Evans (MTV’s Teen Mom 2) tape, I was shocked and infuriated that this woman can even call herself a mother. A true poster-child for irresponsibility! A young woman with a potty mouth in front of her son! Caught on camera, chasing another vehicle who supposedly cut her off and made her ‘skid’ off the road.

Then, what she did made her look deranged, ridiculous and stupid–by pulling out a gun! If the other driver had done anything wrong, after the way Ms. Evans behaved with her road rage, made the person look like John Paul II.

In continuation, what this reality star did was to continue on a spiral of repetitive bad decisions. Things a person driving a vehicle ought to never do…

While she continued giving chase to the driver, calling 911 (while she drove and spoke on the phone), going for her gun and looking insane for the cameras…

In what world did she think she was correct or behaving better than the other person?

When something like this could have been handled by calling the police and giving them the license plate number of the driver at fault or who almost caused the accident.

And still, this is the particular problem which causes incidences of violence in America. It’s the case with Americans overreacting, giving chase and pulling out guns!

How many incidences have I been in as a driver and we exchanged a couple of words, and called it a day!

There’s no need to escalate the violence if nothing tragic happened, thank goodness. But road rage is turning into something of a literal ‘blood sport’ out there!

A person isn’t any lesser for avoiding a confrontation and most importantly, if they are carrying a weapon. Because weapons ought to be carried by responsible-rational citizens. At least I think so! Not by overly aggressive people who will pull the weapon at every corner!

But I’ve been in five incidences in my 24-year driving experience, when the drivers just chase me down to give me a verbal-tongue lashing! Hey, I never said I was a good driver! What a useless action, when these problems are easily solved by calling the cops!

Citizens should never get involved in such aggression or taking matters into their own hands, and if they do, it’s to calm tempers down and not make matters worse!

For this young woman, what she did made her look irresponsible, immature, like a maniac and terrible person!

And that is all from several minutes of tape, since I don’t personally know her and can only judge by what I saw!

Because in the end, it isn’t what’s done to you, it’s how you respond which makes the difference between rationale and idiocy! Who is the better person? Especially if your a celebrity or some kind of reality star in which your life is caught on tape and you ought to be an example to others. But I guess this wasn’t the case!