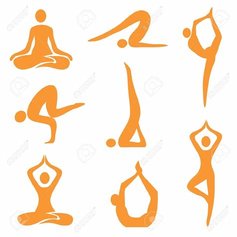 With a stretching of the limbs, literally [almost] leaving my guts all over the floor. This was my introduction into the world of yoga.

I thought of it as torture and sometime later, I’d change my mind!

There was these constant sounds of popping bones!  A stride, a need, a perfection to become limber!

As I incursion into a ‘new world’, which I thought would never be for me.  But has become the norm in my quest to feel better and attain a sense of nirvana, as my body gradually improves after every practice.

The basic meaning of yoga is as follows.

A Hindu practice, an ascetic discipline to help in the control of breathing, meditation and assist with the flexibility of body postures.  Practiced for health reasons and relaxation.

The posture may seem like those of a contortionist, but these motions aren’t!  They are coordinated by a yogi that will guide/take you through several levels: from basic, intermediate to advance.

Originally developed in India by the yogi masters some 25 centuries before.  Indians took it to the west when they immigrated to the U.K. by the mid-19th Century.  With their knowledge, they helped spread this art form throughout the British Isles, Europe and later, North America.

Yoga has recently taken a grasp not only in the western world, but especially in neighboring China.

Where females [mostly] stride to lose weight, improve on their physical appearance and health in the long run!

Yoga holds, as it spreads around China like ‘wildfire’, to the mantras of: physical, mental and spiritual-well being.

What’s most important to attain, according to yoga practitioners, is that mosksha (which is a form of liberation) and karma for enlightenment.

The great thing about practicing yoga: it crosses borders, religions, and happily unites peoples from all corners of the globe.  Focusing on wellness and peace of mind in the process.

And what can turn you into a yoga enthusiast?  It’s interesting, because it allows the practitioner to attain daily life-setting goals.  The exercises can assist not only in control of the body, but in greater control of the mind!  By breathing, and always, remember to breathe.

Other than helping with relaxation, yoga helps with medical issues, such as: premenstrual syndrome, schizophrenia, depression, cancer and heart disease.

Alison, a young colleague of mine has become a devoted-yoga follower.  And for her, yoga is as follows, “Yoga for me, in the very beginning, was to lose weight!  As time went by, it became a belief system to keep going and do it everyday!  The soul of yoga is deep breath and to refresh the mind.  The world feels more peaceful when you get into the yoga lifestyle.”

In the meantime, as the world little by little comes to yoga…  I’ll continue with my elemental practices.  And as my bones stretch to become looser; I’ll feel again the popping sounds, and know that I’m finally on the right path to liberation and feeling better about myself!