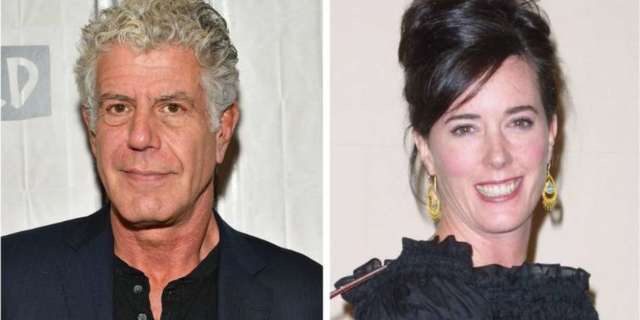 The middle-aged generation and the high rate of suicide

With the recent deaths of Kate Spade, fashionista and handbag empress of the fashion world and Anthony Bourdain, international-celebrity chef; it’s noted the high rate of suicide affecting the middle-aged generation.

Presently, these string of deaths are largely due in part to: impossible expectations in life, divorce and physical/mental illness.

The painful process of suicide has become not only apparent in the United States in the last 20 years, but also here in China.  When people decide to take their lives because of depression.

This issue hasn’t gone unnoticed, and for that principal reason it’s important to talk to others about what’s going on.

However, when a society is focused more on technology than talking to each other…  This is a problem.

More often than not, those who talk about their emotions with friends and family, and receive positive reinforcement are most likely in the long run–to fight against the thoughts of suicide, desperation and depression.

If you ask me, honestly, have I thought about suicide?  Damn straight, I thought about it many times!  I’m human, there are moments of extreme loneliness when I’m isolated from my loved ones and I rarely have people to talk too.

But I think about how many of those friends and family I’ll be hurting because of my selfish act.

Yes, suicide without a doubt is a selfish act.  When a person commits suicide they are only thinking about themselves and their pain.  Not those left behind to suffer!

Is suicide justified in certain cases?

Life is important, however, there are moments when terminal illness hits a human being so hard.  Will that person be able to ride it out and waste away?  Or, is suicide the best way to end a prolonged and terminal illness?

That’s an ethical question that only the person dealing with the pain can answer.  But certainly, nations like: Switzerland, the Netherlands and Belgium allow assisted suicide when they are affected by mental or terminal illness.

What I’m talking about here is a health crisis among the middle-aged population of industrialized countries.

Most cases of suicide in contemporary times is due in part to stress related to work.  Others feel they only have their work to keep them going.  They are alienated or estranged from their families.  An individual after their day is done doesn’t have anybody to talk too.

Sometimes on the subway, I just want to talk to the stranger next to me.  And it’s a bigger problem, when everybody is into their own lives and on the phone.  The deeper question is, are they truly on the phone?  Or it’s just to chase away those lonely blues.

Couples who can’t have children and bachelors often contemplate suicide in today’s society.  Since they don’t have kids, there’s nothing to live for and keep them going.

When one of the fathers of Cantopop and ‘gay icon’, Leslie Cheung (Zhang Guorong) committed suicide in 2003, his last note indicated his deep desperation and pain on living.

It’s time to stop treating mental illness with shame and begin with the opening of minds to help those affected greatly by it.

Suggestions, create [other than a suicide hotline] anonymous encounter groups for those in need.  Plus, it’s all about the person affected by depression to take the first steps and ask for help!

Usually, the fog of depression will subsequently lift after a couple of days.  The toughest part is to ride it out!

But for those who feel they can’t ride it out, there are numbers, websites and email below to assist you.  Keep in mind, this is just a preventive/temporary measure to help anybody with a mental illness.  They are not doctors!  Heck, I’m not a doctor!  These are just simple suggestions to follow.  In the long term, for those suffering from depression and constant thoughts of suicide, it’s important to talk to loved ones/friends/family, seek out professional help from a counsellor, doctor (psychiatrist or psychologist).  The latter two can help you better in the long run!