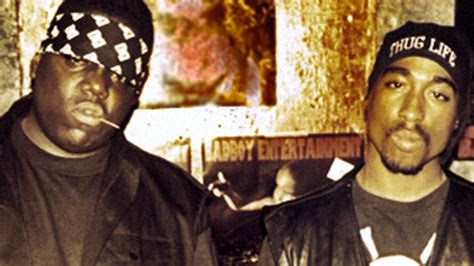 “Unsolved: The Murders of Tupac and the Notorious B.I.G.”

What a story and what began as a beautiful friendship between two artist, ended with both rappers being gunned down months apart between 1996 and 1997.

Gang war?  East coast versus West Coast?  The rivalry between Death Row and Bad Boy Records? Crips versus Bloods?  Was this all over money or gang related? Nobody will ever know!

And what the hit USA network series tries to expose in theory is how the L.A.P.D. (Los Angeles Police Department) covered-up the murders.  Because till this day, these two murders are unsolved. But it goes deeper than one might think.  For years it has been stated that it was dirty/corrupted L.A. police officers who had done the killings under contract hits.  Going as far as to blame the planning and plot of both murders on its mastermind, Suge Knight-former President&CEO of Death Row Records.

But Suge Knight always had a darker side.

He has been known in the rap world as a notorious gangster who likes to intimidate his artist and employees by giving them beat downs.

What was made into gorgeous music, became a toxic environment for both artist.

In a world that after finding fame, fortune and getting out of the ghetto–why did it have to end so badly?

What did these two artists do after getting out of the drug world and poverty?  They go back into the violence and street mentality.  One which is of petty vendettas, inner city attitudes and unnecessary drama.

Many stories have flown and conspiracy theorist have tried to explain Suge’s bigger involvement in these deaths.  One reason was to stomp out the rivalry/competition. But to kill his main artist, Tupac, to think of it is absurd.  However, it was said that Tupac Shakur was planning to leave Death Row Records to form his own Makaveli and take all his connections and money with him.  Which would’ve been a huge loss for Suge. Since Tupac wasn’t only a talented rapper, but also a great actor on the rise!

For Biggie, he was the man, the rapper with the ‘easy flow’ who could conquer any crowd with his charm.  Not for his looks, but for his poetry and naturally gifted talents.  From the streets of Brooklyn, New York rose to fame thanks to his friend and mentor, Sean Combs.  Leaving behind for just a little while a life of violence and drug-dealing.

Tupac and Biggie had the world in their hands.  What destroyed them both was something called, “Gangsta Rap”.  A lyrical style of rap: somewhat painful, brutal, violent, dirty, verbally pornographic of life in the projects and what is life on the streets for a black-man in America.

What people (fans) and the industry have to understand is the following: “You are what you preach!” and “If you live by the sword, you die by the sword!” Sad, isn’t it?

And these two rappers in a single-handed move put themselves in harm’s way with what they sung.  They became targets and were manipulated back into a way of life they should have left long behind once they rose to fame.  But didn’t!

Two poets that could have done more with their lives, just taken away, cut down in their prime.

Tupac, he was the best; however, allowed anger, bitterness and rage to fuel his world. Therefore, it controlled a better part of his emotions.

For Biggie, another poet-General could have done greater things with his music style.

The series also shows a preponderant nature which repeats itself.  A commonality which hasn’t disappeared, whether it’s 1997 or 2018.  Most crimes are tragically over petty squabbles, usually black on black and the police are still killing African-Americans of out sheer fear and ignorant prejudices.

Tupac and Biggie, what started as lovely-friendship ended rather shamefully.  Two victims in a ‘turf war’ blown out of proportion, which should have ended in words and not bullets.