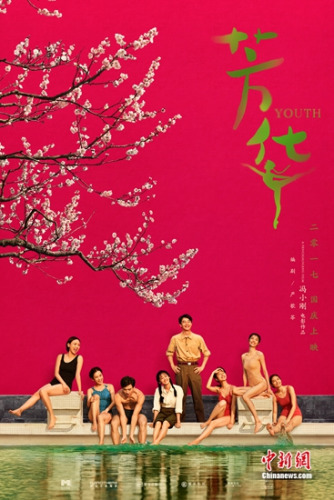 “Youth (芳华)”, the movie which takes you back to bitter-sweet nostalgia

Remembrances can be sweet but also tragic; especially when dealing with painful events in history.  This movie focuses on such, the end of the Cultural Revolution and China catapulting into a developing society.

Looking back, one tends to say, “The good old days!”

This motion picture directed in a classical way, just genius, by the director Feng Xiaogang.  Inspired in his days of youth for a crush he had on his dream girl, lady Yang Hui.

The Chinese movie, “Youth” takes the people back to a purer time and with events in history which mark the dusk to the ‘Cultural Revolution’.  It’s about innocence and also during the cruelest time of the reeducation camps.  This end will come with the passing away of Chairman Mao and a new phase in reviving the country economically.

The story unfolds with two youngsters joining in 1976 the PLA’s (People’s Liberation Army) military-artistic troupe.  Liu Feng (Huang Xuan), the young man with a heart of gold and He Xiaoping (Miao Miao), the country bumpkin–but great dancer in love with Feng.

The heart pounds with emotion in every scene.  Sometimes making you laugh, cry or breaking your heart.  It’s simplistically done in a great way.  It teaches a lesson for our over-idealistic youth.  Nobody can do for you: accept yourself, friends and family.

In the process of being artistically trained, here Xiaoping begins her own reeducation. However, she’s often bullied for being from the countryside and not washing consecutively.

There are scenes which show the changes in youth right after the passing of Chairman Mao and how they begin to challenge authority.  The young becomes more rebellious and start listening less to their elders.

In this case, Feng steps out in defense of Xiaoping.  However, because of Feng’s back injury, he cannot always be there to protect or dance with her.

Later, in a serious misunderstanding between Feng and a young lady he has fallen in love with, Lin Dingding (Yang Caiyu); he’s kicked out of the troupe and sent into the infantry units of the Army.

In anger, Xiaoping refuses to participate in the events of the troupe.  Therefore, she’s also transferred out while pretending to be ill.  She’ll become a combat nurse in the regular Army.

When a border war between China and Vietnam erupts (1979 – Sino-Vietnamese War), Feng goes to the front and Xiaoping is sent to a field hospital near enemy lines.

In a tragic turn of events, Feng will lose his arm in a hellish battle and Xiaoping will lose her mind while trying to save a burnt soldier’s life.

The war comes to a conclusion and by 1980 you can see the struggles of these two veterans once they leave the Army.

The disbandment will sadly come to the army-artistic troupe, with the changes in the Army’s strategic direction.

Xiaoping is bound for a mental hospital and Feng becomes a one-armed driver in Beijing.  They both struggle to cope, as most veterans do after a war.

You can hear the audience taking sighs in deep-sorrowful breaths.  Powerful indeed! As the film demonstrates the changing in people’s attitudes and there’s less caring for those whom have suffered and more individualism.

The film has a tender moment in its closing scene, when Feng with his left arm embraces Xiaoping as they meet in a cemetery 16 years after war.  Showing their love and comfort in each other.

What can I say about the film?

This film should get a nod for the Best Foreign Film Awards.  It was brilliantly done, wonderful and delightful to watch.  Bringing contemporary-Chinese history to light. One word wraps and says it all for the entire film…  Beautiful!  It’s like an active volcano under a peaceful ocean.

The main actress stole the show over the main actor.  For this reason, I gave this film four-and-a-half stars out of five.