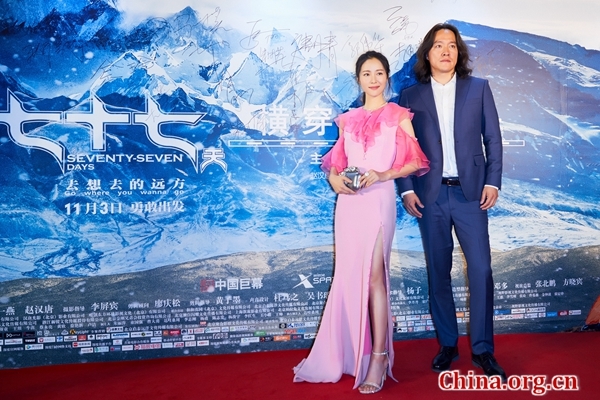 One of the truest forms of motion pictures, now literally hitting China are the Indie (Independent) film concepts and can teach all of us how a well done flick can be extreme successful.

Take this one, “Seventy-seven days”, not only for the beauty of the acting, but for the sequences.  Magnificent and beautiful in Tibet’s ‘no man’s land’, that’s unforgiving if human beings aren’t properly prepared.  Even with all the survival training in the world, this part of China will still ‘eat’ any man or woman up.

This bio-pic deals with the story of Yang’s (acted and directed by Zhao Hantang) crossing and what’s he’s put through to do it.  While he befriends a beautiful paraplegic, Tian Lian (Jiang Yiyan), who was caught in an accident several years before while taking photographs on an expedition.

Yang has to deal with everything.  The harsh climate, altitude sickness, wild yaks and wolves which could easily kill him.  Through it all, the film exposes one basic truth, no problems matter when survival is at stake.

The viewer is taken for a wild ride, almost like a roller-coaster of intensity.  Because, to watch some of these scenes, as in life imitating art, the actor had to risk his life.

The motion picture will take the audience through moments of sheer terror: when sandstorms hit, yak and wolves are trying to attack this adventurer.

Two of the tenderest moments, and they show people’s humanity…  How two people can connect and bond with nature to help get out of life’s suffering and pain.  The other, when Yang saves a baby wolf.

In reality, the actor himself did this and it showed what he was willing to sacrifice to get this motion picture completed.  It showed sequences when he’s falling off his bike, a sudden yak attack and the one he’s coming in contact with a wolf.

Wow, gorgeous portrait, and in some of the scenes you couldn’t tell the difference between earth and sky for its beauty.

Yes, I would say, this motion picture is a must see; however, I’d also recommend more films like these in China and for exportation.  These are the sincerest and truest forms of art.  But to make these flicks takes a toll on the heart and soul of the actors and crew.

In several scenes, at the end, it showed how much the crew suffered and sacrificed to get this work of art done.  Demonstrating vehicles stuck in the mud, the freezing cold and heat, constant weather exposure and accidents.

Risky business to do a film like this and well worth the theater experience.  Because films like these only come around once every 10 years.

The rest of the motion picture industry can be just vanity, but this one holds to something bigger.  Human beings trying to capture perfection against the elements of mother nature.

These 100 minutes weren’t only entertaining, but educational and to see what Tibet is all about.

One thing about “Seventy-seven days” captured my attention.  When the Army Officer is trying to educate Yang in the beginning.  He expresses that even a common cold can kill a person at high altitudes.  That got my attention rather quickly and it was scary, indeed!

Giving a warning at the end credits, that a person shouldn’t risk their lives unless well trained and prepared for the elements.  And even then, exploring this forbidden land is still a major risk to health, life and limb.

I gave this film four-and-a-half stars; because these motion pictures are few, rare and are often exceptional in great quality.  Just masterful!