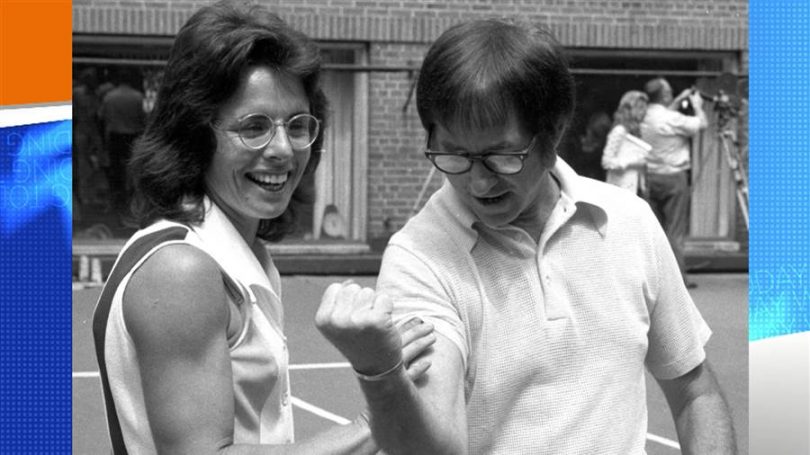 “Battle of the Sexes”

This motion picture addresses the continuous and ‘eternal’ problems which ensue among the sexes.

The issues of inequality and unequal pay in the workplace.

Furthermore, it shows how little regard we have for gender when it comes to people whom desire to live in a homosexual relationship.

The story is about the tennis legend, Billie Jean King (performed by Emma Stone). Taking the viewer to the 1970s and into Nixon years.  The environment was ripe.  Many of the topics of the day have a lot of commonality with Trump’s presidency.  Since in ‘life imitating art’, Trump is a big fan of ‘Tricky Dicky’ (President Richard Nixon).

At the time, female tennis players were paid 80 to 90 percent less than men.  These women were doing the same job professionally and were making nearly 10 times less in their earnings.  While both sexes were drawing the same crowds.

Here, upon this gender discrimination, Mrs. King fights back for equal pay and equality.  Battling the ongoing stereotypes which women often face.  She wants to show that all females can stand literally ‘toe to toe’ with males.

At first, Mrs. King decides to breakaway from the male chauvinist U.S. Tennis Association and form a female version (U.S. Open) of her own.

The movie also shows her ‘in the closet’ lesbianism, when she has a fling with her personal hairstylist.

The movie doesn’t only deal with the discrimination of yesteryear.  It demonstrates something which still happens today; with women getting 25 to 30 percent less pay in the work environment.  And the LGBT community is presently pushed aside and rejected; especially in America.

What proves that women deserve the same opportunities as men, comes from a man himself.  When tennis pro-legend, Bobby Riggs (Steve Carell) invites Billie Jean to a match, ‘Man vs. Woman’.  Who will be the strongest?  Who will win?

What becomes later is typical of American sportsmanship, everything turns into a frenzy and media circus.  Turning everything into a joke and becoming almost comical.

When Billie Jean wins the match, it represents her greatest moment; not only as a woman, but as a tennis player of great talent.

This flick doesn’t only show the transcending historical events in the country, but also we can see history repeating itself back in the U.S. in contemporary times.

Billie Jean will later divorce her husband and after her retirement in 1983 becomes the first female sports-star to come out as a lesbian.

Marking three major points in contemporary history.  A stride for the betterment in pay between the sexes, equality between men and women and the mark in Civil Rights for the LGBT community.

Why would I recommend the movie?

Not for its great acting achievements or because it’s a breakthrough film.  I’d recommend it because this issue hasn’t gone away.  It’s ‘ever-present’ and everywhere.  It’s a motion picture to educate the mind and senses to what as people we have to correctly stand for.

It’s a topic which continues to affect everyone, not only in the U.S. but around the world.