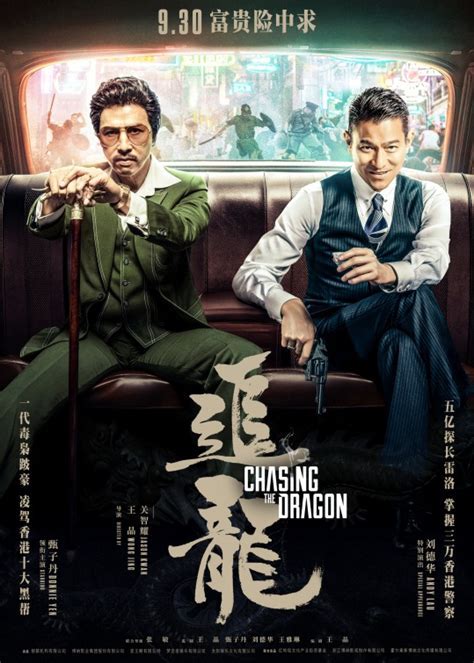 Chasing the dragon was an expression which later came out during the second half of the 19th Century.  Representing those who used opium and later in contemporary times produced into heroin.

The film brought to life magnificently what was developing in the Hong Kong ghettos at the time; especially when dealing with a population of illegal immigrants merging into the territory of Kowloon.

This particular story focuses on the bio-pic of Ng Sek Ho (performed by Donnie Yen), a person who escapes from Mainland China and gets into Kowloon.  At first he’s an adamant participant of the gangs and drug world.  But he’s later forced to fight it out on the streets as an enforcer, in desperation to get out of poverty.

With a corrupt police force, as they take from the ‘skim’ (bribes) and watch the violence grow.  One of those officers who watches the internal struggle in the beginning and does nothing, is Lee Rock (Andy Lau doing a reprisal of the role from his 1991 movie).

Ho decides there’s no way out, either it’s to become ‘bait or a shark’.  He wants a piece of the action and decides with his gang to fight his way to the top!

When a gang war ensues and police have to get involved, there’s a moment.  It’s crystal clear when Ho saves the life of Rock and something changes in their relationship.  Becoming friends and protecting each other; however, in doing so, Ho is caught by one of the rival gangsters and his leg is smashed with a brick to piece.  Ho will survive, but it’s from this point he evolves into a crueler form of a man and on the streets they begin calling him, Cripple Ho.

Ho will rise to become the drug lord of Kowloon for more than a decade.  Getting deeper into the smuggling of black-market gold, heroin, gambling and prostitution.

Now, the movie is masterfully done.  Taking the viewer on a retro trip to the 1960s and early 70s.  It’s classical and it shows old Hong Kong at its best and worse. Demonstrating in its scenes a bygone era.

Not only does the scenes do the movie perfect justice, but in taking the moviegoer back, can also show a negative HK: one of vice, police corruption and racism from the former British masters towards the Hongkongers.

The motion picture FX were wonderfully done when portraying the old Kowloon Walled City.  When it existed, was once a maze and labyrinth of alleyways, corridors and apartments easy to get lost for hours if you didn’t know how to get in and out of this ghetto.

As the City flourished and developed, the Director catches superbly the environment, as well as the old Hong Kong International Airport.

Wong Jing didn’t spare the punches on this film.  He showed what the underworld is all about.  Taking an old movie and remaking it into something better.  That’s what a director should do.

Further, when watching the film, it speaks to an international audience, not only to those who speak Cantonese.  As it wasn’t my case and that my Putonghua is kind of shady; and in not understanding Cantonese, I could still understand the flick without any subtitles.  Watching it for the second time was like a gem!

“Chasing the Dragon” didn’t only capture the essence of history, it did so well without any romanticism.  Taking those who watch it on the rise and fall of a gangster, the Golden Triangle of the drug world and the foundation in 1974 of the ICAC (Independent Commission Against Corruption) in Hong Kong.

The movie for me was like a time machine of entertainment, but this motion picture sends out of a clear warning on how most members of the triads end: either dead, poor, on the run or in prison.

For this motion picture which is soon to become a classic, I gave it four stars out of five.  Well done!