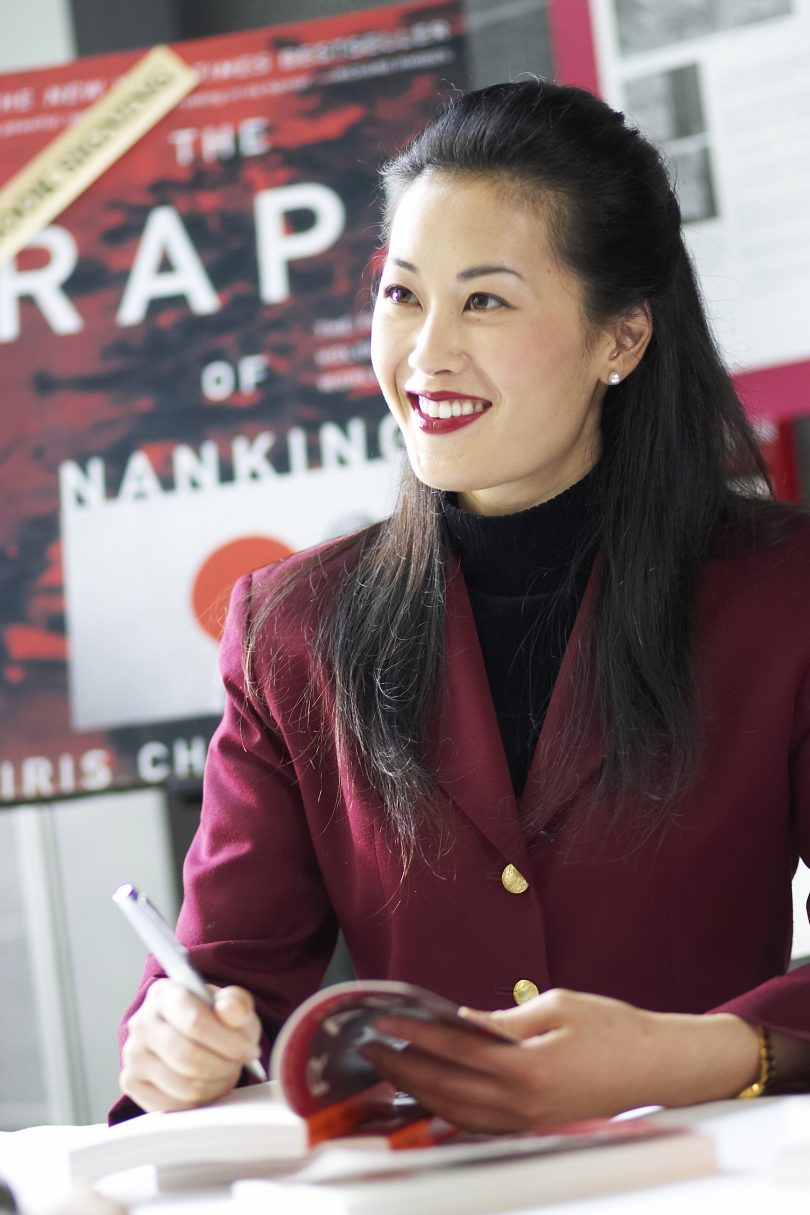 Taking a seat back in 1998 at St. John’s University up in Queens, New York. Everybody awaited with expecting desire.  People from all backgrounds sat to know what this young journalist and writer had to offer.  Few knew her, and later she’d become an international bestselling author.

Since she was talking about her book, “The Rape of Nanking”.  She spoke with sure-fire passion, sometimes as in her book, going into a deep and angry rant.

But you could easily forgive her mannerisms, because of what her parents had survived during the Nanjing Massacre and what prejudices she had to overcome as a Chinese-American and female.

For those who are born in America of immigrant parents, know all too well what is to feel like they don’t belong!

But this amazing writer was Iris Chang and she brought an intelligent-wisdom beyond her years to the table.  For she knew what was to grow up as a child of newcomers and a perpetual insider to the system.  Expressing these seeded emotions in her book, “Chinese in America”.

Her writing was unique, special and elegant.  Just like her beauty, exquisite and magnetic.  Her thoughts flowed off the pages and it made people soon after want to join in the fight for justice.

She brought the issues and plight of millions of Chinese and Chinese-Americans to light.  Something little known before 1997.  A history sometimes forgotten, placed aside and often, speaking honestly, ignored.

Few writers had done what Iris Chang did.  Unless they were sensitive souls like: Pearl Buck’s The Good Earth, Jonathan D. Spence’s In Search for Modern China or Amy Tan’s Joy Luck Club.  Exposing the forgotten truths about a country’s five millennium and giving the credit to what and who it is due.

Ms. Chang was the one who brought the history of China for all to know.  And especially to the United States.

Because more than two decades before, people knew through the media about the heroics and tragedies of Pearl Harbor; but few spoke or knew about Nanjing.  Unless they were connoisseurs of China, historians or Chinese themselves.

As people remember the tragedy during those six weeks of the Nanjing Massacre, I’d like to take a moment to say… How much Iris Chang is missed in all our lives; especially for those who began to study and learn about this great nation before living here.  It was thanks to her that this knowledge was opened and poured for us to savor it today. She opened the floodgates to a history few Westerners knew about.

What happened later to this young woman was a tragedy in itself.

Taking her own life and like most tormented writers, she was a soul facing sleepless and lonely nights in desperate depression.  Paying the price for her art.

Wish she could be with us today!

There will never be another Iris Chang, what comes about are the others or just imitators.  What’s left are only the memories.  But what she left behind in history, was the legacy of her books.  It was one in classical knowledge to recount and learn about Chinese history; moreover, the Chinese experience abroad.

With these few words, I’d like to say, thank you for what you gave us and R.I.P.