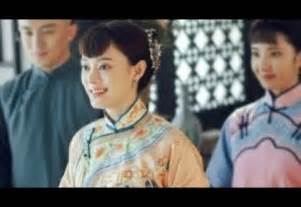 Not to fall into the sexist notions of calling women, girls.  From my point of view, it represents female youth; not in age but spirit.

Plus, according to the old Chinese proverb, “Women hold up half the sky!”

It’s more about focusing on the life of an extraordinary female who came up and battled through extreme cases of adversity.  This is indeed an inspiring story, a historical part quite often forgotten in contemporary China.

In a unique space and time, a woman rose from being an orphan to a great position of wealth and power in olden China.  Raised as a street hustler by her stepfather.  Like the vagabonds out get to whatever they could in food and a place to sleep.

If we think about this ‘Ci Xi’ (Royal Lady) and how she rose.  We can bring this history to light and truly feel inspired!

Look at this past recent series, “Nothing gold can stay” (那年花开月正圆).

It’s about the life of Zhou Ying, portrayed by the gorgeous-Shanghai actress, Sun Li.  You know, the one from the Empress series and “Hot Mom”.

The series itself was shown throughout mainland China from September to October in putonghua (Mandarin) has suffered an even bigger popularity boost.  Now T.V. channels down in Guangdong, Hong Kong and Macau are doing a rerun of this hit Soap Opera or call it, Peking Opera in guangdonghua (Cantonese) through the month of November and possibly into the near future.  Because the series in itself was so successful and it shows a hidden history of China; especially when it comes to women.

It focuses on the tempestuous rise of this modern-thinking businesswoman from Shaanxi in 1869.  From the striking poverty of the streets, adoption, often abused and married into a commercial Qin family.

Later, how she dealt with her husband’s death; by literally diving into his work and building a commercial empire.

In a time when women quite often weren’t allowed to learn how to read or write; furthermore, not hold a social status, she basically did the impossible.  Ahead of her time and a visionary…

She lasted a mere 42 years, and with her death, the decline of the Qin merchant family.

China began feeling this wind of change towards the end of the Qing Dynasty.

And there’s a lesson to learn here.

I often hear the expression, “Girl power!” In truth, females like most women could rule the world.  But sometimes in the often throes of male-chauvinist society, it places them down in a worldwide minority.  Whether it’s for ‘X’ or ‘Y’ reason, the female gender has to deal with discrimination under a literal ‘male thumb’.

Do I believe women should get their equal rights?  Of course, once they don’t trample over my rights, I ought to never stomp over theirs.

Therefore, like Zhou Ying, women must fight for the right and their position in society.

When will it ever change?  When men are educated to understand the pain and hardships of women.  It starts with mothers and later with equal parenting.  Fathers and mothers who believe in the same goals and paths to teach their children about equality amongst the sexes.

In business, women are often reduced to control less than 10 percent of the globalized wealth.  While men control the other 90 percent.  If you don’t believe me, just check the photos when business professionals gather.  These people inspire success and prosperity.  They’re all millionaires in their own right.  And typically, out of group of 10, only one is a woman.

We can absolutely state, affirmatively, things are getting better after the late 19th and throughout the 20th Centuries.

But it was not too long ago, during “Woman’s Suffrage” back in the U.K., when things really began to change and woman’s rights took off.  It spread like wildfire across the planet.

This single act which evolved in countries 150 years before.

What would later spiral into the something known as “Woman’s lib” in the 1960s.  Led by forerunners like, Gloria Steinem.

It was and still is, the struggle for liberation and to be measured ‘toe to toe’ with men. What is feminism indeed.

And for now, while the situation evolves for the best…  I’ll just sit a little while and watch Sun Li bring back the old history of China in a well acted series.