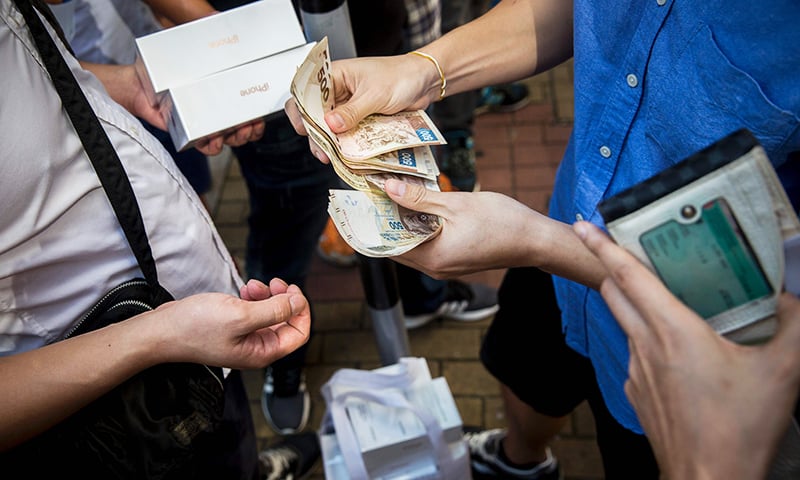 In front of Hysan Place mall that once bustled with trade in iPhones, a Hong Kong shopkeeper sits surrounded by dozens of boxes of Apple headsets, grumbling that business is grim – a domino effect of lack of demand from mainland China.

Since 2008, hundreds of thousands of Apple devices were smuggled across the border into mainland China, where they could be traded for as much as four times the price in Hong Kong.

But now that era seems to be almost over. Since then, mainland China makers have invested massive capital into R&D, producing competitive models for a fraction of Apple’s prices. Moreover, Apple has recently been launching new models almost simultaneously in both Hong Kong and China, changing their original trend of delaying the launch of new models in the mainland. Potential consumers no longer have to wait, neither pay extra money when looking for new models.

This may eventually become a wake-up call to the city’s role as an international hub. China has been opening up, and it is developing in a much faster pace, consequently making Hong Kong’s role of a hub useless.

The demise of the city’s role as a middleman selling everything from formula milk and iPhones to mainland Chinese concerned about food safety or eager to quickly get their hands on high-tech gadgets may become a reality soon.

iPhone shipments in China declined year-on-year for a second straight quarter, according to Canalys, a consultancy, adding shipment volume dropped 12 percent in April-June from last year, and 14 percent from the previous quarter.

In China, Apple’s market ranking has slipped to fifth, overtaken by local brand Xiaomi, noted Strategy Analytics, and China’s Huawei is now just 3 million phones away from overtaking Apple as the world’s No.2 global smartphone vendor after Samsung Electronics.

According to Canalys’ tracking of smartphone shipments, Apple’s iPhone shipment volume in Hong Kong represented 4.5 percent of that in mainland China in the latest quarter, down from 33 percent just two years ago.