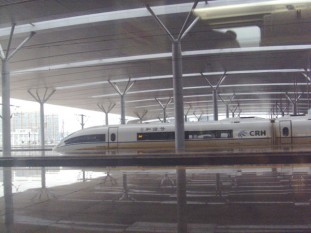 High-speed trains and the need for them

To be completely honest, I don’t love flying.  I do it out of necessity.  Whether it’s for pleasure or business travel.

My first love was always trains.  Yes, this Yank loves trains, even when I grew up in a car society, I still wanted to take the train to see my country.  Something I sadly never did, since I did everything via bus or automobile.

Then, I went to Europe and lived there for a couple of years and understood the convenience of the fast trains.  These rapid machines of transit could get you from point ‘A’ to ‘B’ in a couple of hours. Crossing the borders between countries was just a ‘snap of the fingers’.

But, was it the Europeans whom first expanded on the fast transport?  No, not really!

It was first developed by the Japanese engineers in the 1960s to rise from the ashes of World War II.  Notice how incredible these super-machines of velocity are.  And the same later took place in Europe.  They developed the rapid-rail to rebuild the entire European Continent.

In China things were slower after the Civil War.  Chinese became more of a bicycle society.

However, in the last decade with the ‘D’ train, traveling around China just soon became heavenly.

It was my first experience back in 2009, when I traveled from Shaoxing, Zhejiang to Beijing in just under 13 hours.  For me that was incredible enough!

Then, Chinese engineers came out with the ‘G’ version.  This type surpassed all my expectations, and suddenly, travel time was cut in half.  Taking the high-speed rail to new heights and a zen of near perfection.

The Maglev system can reach speeds up to 600 kilometers an hour!  You can’t get any better than this.

Further, in the next three years China will develop bullet trains which can reach speeds up to 400 kilometers an hour on average.

The present speeds of the bullet trains vary between 200 to 300 km. per hour.

We’re talking that around the 20th Anniversary of the Rapid-Train System, China will have surpassed parts of Europe, Japan and North America in the fast-transportation growth.

Americans are catching on with the rapid-transit train.  And I have to say, it’s about time!  Yes, we love our cars, but it’s time to pollute less the air and try more metros and trains like the Japanese, Europeans and now, the Chinese.

What a great example to follow in technology and one of the things I’ve enjoyed from the bullet trains is being transported in a timely manner, comfort and safety throughout my travels in China.  Whether I’ve gone to Beijing, Nanjing, Suzhou, Shanghai, Shaoxing or Xi’an, I’ve always been in awe on the great efficiency of this service.

Now, it’s getting faster to accommodate travelers, local tourist and those from abroad with a better service.

Kudos with the service and please continue to improve further on the safety and comfort.