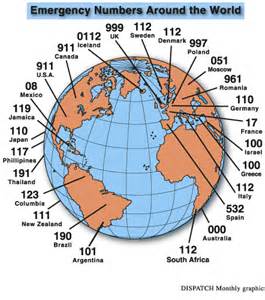 This system took form back in 1937 and it evolved thanks to the British into a worldwide phenomena to better help their fellow men and women.

A system to connect police, firefighters and paramedics.  One number to gather in unison and save lives.

And to be honest, it was the emergency number that initially didn’t work.  It was a genius concept in its foundation, because it was a period when emergencies and crisis centers were growing with the population.  With societies expansion it happened rather promptly.

The idea would later take hold throughout the civilized world.

But in England it was perfected to get a hold of a switchboard operator.  Sometimes in the imperfection of life, the system would overflow with calls and breakdown during a crisis.

After 1937 came the most gray years around the world and for the U.K.  Especially, when London was constantly being bombed during World War II.  The emergency services with the help of civilians gathered and began to perfect the timing in their rescues.  From this point, the response time got better and better to what it is today. Around the British Isles, depending on the emergency–most emergency services get to the site of an accident in just several minutes.

Before the War and after, the 999 services were developed further in places like Hong Kong and later, Macao.

The emergency number soon took hold across the planet and in places like the U.S. with 911.  Sadly, the system in 1968 didn’t work all that well and it lagged far behind until the early 1990s.  Many emergency technicians wouldn’t respond to emergencies in African-American neighborhoods.  Rap songs like Public Enemy’s, “911 is a joke” came out to ridicule and often hurl insults at the lack of response in black communities.

Thank goodness times have changed!  It has progressed and in present times, it has become so good–that it’s one of the best first response teams in the States.  Calling emergency services will take an average response time of eight to 12 minutes. Incredible how fast it has become in some major cities!

In China, there’s 120 for ambulance services, 110 for the police and 119 for the fire department.  The system here is far from perfect, but at least there’s one.  The average response time for an ambulance [if they don’t hang up on the call] is 45 minutes.  It has a long way to go; however, when the system started in the U.K. and U.S. it also began with many setbacks.

Therefore, let’s support these services to continue doing their functions in saving lives.

Striding for greater services throughout the world.