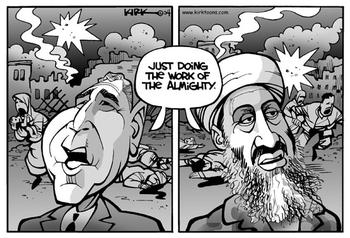 Extremism, now and then

I still try to fathom in my life what makes an individual hate another so bitterly. I mean, I’m not talking about just a simple case of people disliking each other, but a feeling passed down in hate and later, murder.

Racism works [tragically] this way, it’s taken sometimes by intellectuals and passed down to the illiterate by any means of control. Or it’s a parent teaching a child to hate those whom are different than they are through fear.

When people pass down seeds of hate, it’s usually [if done by leaders] to hold unto power, whether an ideal is right or wrong. In the majority of times, it’s wrong when it involves a religion and ideology.

Look at the wars between Catholics and Protestants in the 15th and 16th Centuries. Those which divided Europe and nearly destroyed entire civilizations. Ignorant and fanatical, this sheer hate killed people in the thousands.

This wasn’t counting what the Catholic church did for 900 years with the Inquisition. Killing in the millions, primarily burning those under the suspicion of heresy and witchcraft, and sadly, mostly women. These horrific and savage acts continued into the early 19th Century. It was to keep the Church as a supreme symbol of power in Europe and across the colonial Americas.

Hence, we come to modern day extremism and it doesn’t only conform to religion, but ideology.

When the U.S. Implemented the Monroe Doctrine, it wiped out 18 million Native Americans and it nearly exterminated the population. The African-American population suffered the same fate for 400 years, while being killed in a holocaust known as slavery and with the Jim Crow laws in the southern states, the practice of lynching blacks continued until 1965.

This progressed in Germany, when a man called, Hitler was allowed to rise to power. His was the “Final Solution” ‘thanks’ to the suggestions of Joseph Goebbels and they ended up killing 11 million victims between 1933 to 1945. It started with the mass murder of Jews, then it continued with people who suffered severe physical and mental disabilities. Later it affected any German dissident who protested against the government, gays, Jehovah’s Witnesses and Gypsies.

The Cultural Revolution saw its fair share of fanaticism. Taken to new heights in the 1960s, as young-cadre members destroyed and burned across China 1,500 year-old relics and Buddhas. Affecting with this destruction a rich-cultural heritage and the identity of its people.

Presently, intolerance has continued to flourish. When in contemporary times places like the Third Balkan War (250 thousand people were slaughtered) and Rwanda (one million people killed) we read about genocide.

The other forms of extremism, the ever lasting fight between Jews and Palestinians in the Middle East, which has lasted for thousands of years.

Today, as I write this article, in countries like Iraq and Afghanistan, the destruction of historical artifacts continues with terrorist groups like ISIS, al-Qaeda and the Taliban. It gets worse when speaking about the constant killings between Shiite and Sunni Muslims.

For this principal reason, countries and their political leaders have to stay away from racist comments. The world is presently too mixed, with different religions and already our societies are too multicultural and ethnic. Let’s open our hearts and minds to learn from each other, whether we agree or disagree. Let’s do it in peace…