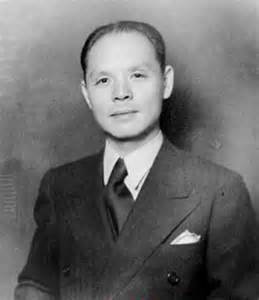 In the past, I’ve often been extremely critical about China not mentioning its foreign heroes.  People, outsiders who served and did great things for this country, forgotten by the turmoil, rush and selfishness of the 21st Century.

However, yes, times are changing and more articles and documentaries have come out in the past six years about these great people: Pearl Buck, John Rabe, Norman Bethune or General Joseph Stillwell.

A name like Schindler is often mentioned in history books and movies.  He’s recognized across the world; especially admired in Israel, the U.S. and Europe.  A man who risked everything to save 1,300 Jews from the extermination camps in Poland.

For a Jewish-street kid [like me] from Brooklyn, New York, this makes me more than aware of what great sacrifices these men and women made for us!  Further, it makes me proud to see them recognized in history and not forgotten.

But, what about Asians, men or women saving thousands by sending them to China.

Well, there was one who took action at moments notice.  He has often been called, the “Chinese Schindler”.  His name was Ho Feng Shan.  He was China’s ambassador to Vienna, Austria between 1938 to 1940.  A man who realized when things were getting tough for the Jewish community; especially after Hitler’s declaration of “The Night of the Broken Glass”.

When Hitler’s fascist, Brown Shirts ransacked across Germany and Austria destroying Jewish homes and businesses by beating people.  Thousands of Jewish symbols and texts were set ablaze!  Then it got nastier after this period, when the Jewish population were placed in ghettos and later taken to concentration camps to be used as slave labor and eventual execution.

Here was when in a two year span, Ambassador Ho approved a total of four to five thousand visas (numbers vary) to Jewish families to travel to Shanghai, China.  Therefore escaping Nazi persecution.

A man nearly forgotten by history and this selfie generation.

Ambassador Ho didn’t talk at all about what he had done, as matter of fact, he took it as a secret to his grave in 1997.  And his actions are well documented.  Certainly, a man of the greatest generation and above all a gentleman.

Nothing at all to do with the narcissism we encounter in our public figures today. People who want to be recognized for everything and do nothing!

Doctor Ho was a man who went against the grain and did the correct thing during a difficult time; which is certainly the hardest thing to do.

In 2015 there was soap opera made in China called, “The Last Visa”.  It’s a fictional tale about what Chinese did to save Jews in Nazi Austria.  But it never truly reflected on what Doctor Ho did.

I hope to see sometime down the line a movie made about his life.  This will be something done 70 years too late, but it’s for a man who deserves the honors.

In times like these, I like to think in the words of the British philosopher, Edmund Burke, “Evil will only prevail when good men choose to do nothing!”