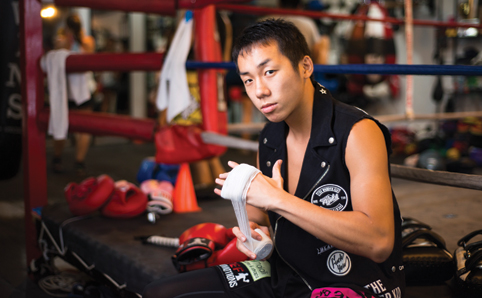 Hong Kong isn’t exactly blessed with many world class sportsmen, so when the 26-year-old Tso won three big fights this year, and defended his WBC Asia super flyweight title, we were filled with pride. There’s now talk of the 11-time undefeated boxer signing to one of the world’s biggest promoters, Top Rank. Stay tuned: next year, we may well have a boxing world champion in our midst.

On a ceremonious day in June, HKAPA graduates decided to mark their receipt of their diplomas by showing their own type of respect to CY Leung, who was present on stage. Rather than bowing to our CE, they showed him the bird, graced him with a moon, held placards demanding universal suffrage and generally told him what they thought of him – the year’s most significant symbol of Hong Kong’s recently politically active youth.

It’s not everyday that a tycoon donates a 100,000 sq ft of land worth $107 million to build a nursing home. With over 29,000 elderly presently waiting an average of three years for a spot in an aged-care facility, it’s certainly a gesture we can salute.

It’s not often we’re applauding our government. But this year, plunged into the middle of the world’s highest profile security issue and amid US demands for extradition, the Hong Kong government declined to give Edward Snowden up. A calm press statement cited technical problems, before curtly asking for clarification about the US tapping Hong Kong government systems. HK: 1, USA: 0.

Being blind, hearing impaired and lacking the nerve sensations in your fingers to read Braille might have stopped most people from high achievement at school. But this year, Tsang Tsz-Kwan became a symbol of inspiration and triumph over adversity when she scored within the top five percent in all of her subjects for her HKDSE exams, all while reading Braille with her lips.

Development in country parks? Not so cool, in our book. And at the centre of the pro-development campaign is the Heung Yee Kuk, the ‘rural council’ that defends the archaic rights of ‘indigenous villagers’. Not convinced? They campaigned against incorporating Tai Long Sai Wan into Sai Kung East Country park, and recently threatened to poison a reservoir if they aren’t allowed to build more houses. Nice.

In November, 32-year-old Ng Tin-Ya reported the abduction of her infant daughter. But after hysteria swept the city, it emerged that Ng had actually fabricated the entire story, later claiming that, after leaving her daughter unattended and finding her dead shortly afterwards, she put the baby in a violin case and in the garbage. Also a contender for most bizarre story of the year.

Home is not where the heart is for this violent couple who were jailed last September for torturing their 30-year-old Indonesian helper, Kartika Pusipitasari. A seemingly normal couple, the electric appliance salesman husband was sentenced for just over three years in jail while the public hospital assistant wife got five and a half. A no-brainer for our list.

May Fung became an unintentional icon for the city’s despair following the spectacular rejection of HKTV’s free-to-air license. Her cooking show on TVB,May and her Guests, featured frequent outbursts of irritating laughter and numbingly incessant promotion of Swanson’s chicken stock. ‘Hahahaha’ quickly transformed from the sound of Fung’s asinine laughter to the sound of millions of Hongkongers demanding TV freedom. Give the remote back, Jinping.

Women’s oppression in male-dominated society? Pfffft. That’s hardly an issue when it comes to this HK couple. The guy cheated, knelt begging not to be beaten, then got bitchslapped at least 14 times. All in public. Yeah, it was caught on film, and yeah, it went viral. The girl was arrested, but we’re not sure whether her or her pathetic boyfriend are more to blame. Either way, we know who had the upper hand in this relationship.