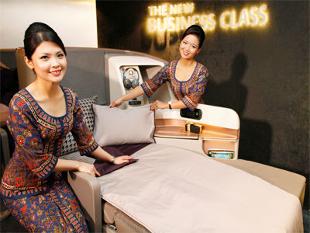 In a confidential test lab in a remote office park near the Frankfurt airport, a small Lufthansa team holed up for five years, refining one of the German airline’s most closely guarded secrets. They called it the V concept.

Six feet six inches long and almost two feet wide, the V concept is the German carrier’s latest weapon in the fierce competition among global airlines. It is designed to withstand shocks 16 times the force of gravity and comes with a cozy padded footrest. It is a new business-class seat, and if you are traveling round trip from Frankfurt, Germany to New York, it can be yours for about $5,000.

Billions are being spent on research and development, architects, industrial designers and even yacht designers to pack seats with engineering innovations and fancy features. Just fabricating a single business-class seat can cost up to $80,000; custom-made first-class models run $250,000 to $500,000.

Those who fly coach may have had a glimpse of these expenditures as they shuffled past the elaborate reclining, angled, semiprivate accommodations in business and first class on their way to the knee-scraping spaces and overstuffed overhead compartments in the main cabin. Travelers in business and first class may represent 10 to 15 percent of long-haul seats globally, but they account for up to half of the revenue of airlines like Lufthansa or British Airways, says Samuel Engel, a vice president at ICF SH&E, an aviation consulting firm. Carriers vying for the attention of these passengers, who have money or corporate accounts that pay for their travel, are counting on good design to escape the grinding commodity nature of their business.

But there is only so much space inside a plane. As the more lucrative seats expand, the coach section often contracts, with more seats jammed into the same cabin space and more discomfort for coach passengers.

“The seat is one of the few elements that an airline can actually make its own,” says Patricia Bastard, an architect and designer who has worked with Air France on its first-class cabin. “There are very few elements like it inside an airplane. There’s customer service, of course. Maybe there’s a bar. But seats are unique to the airline. Seats are critical.”

Lufthansa, Europe’s largest airline and the world’s fourth largest in terms of passengers, is investing $4 billion to improve its cabins, offer satellite-based Internet and upgrade its onboard entertainment system. But the new business-class seat, which first appeared last year on the company’s new Boeing 747-8 planes, is perhaps the boldest attempt to lure the high-value passenger. The seat research, design, manufacture and installation accounts for roughly a third of that $4 billion investment, says Bosler – more than a billion dollars. Eleven planes are now outfitted with the new seats, and Lufthansa is expected to install about 7,000 of them on 100 wide-body airplanes by 2015.

Lufthansa’s task – like that of all the big airlines – was to create a special environment for those big-spending travelers within the inflexible boundaries of an aircraft fuselage.