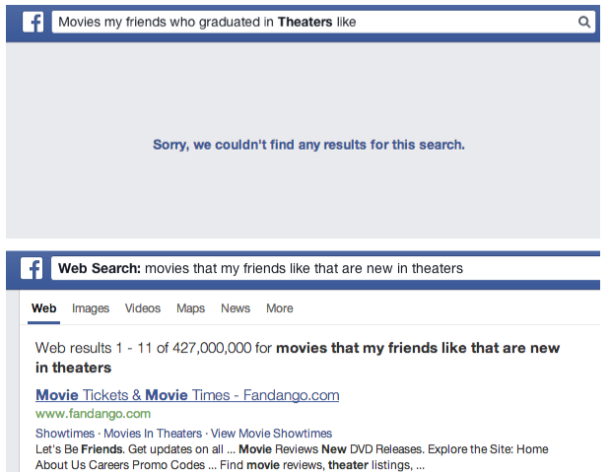 Facebook’s Graph Search doesn’t have the data and parsing capability yet to perform more granular and useful searches. In the example above, Graph Search automatically reforms queries to what it can understand, not what you want to know. (Facebook screenshots)

Nearly six months after its unveiling, Facebook is rolling out Graph Search to U.S. users and others who use the American English version of the site. It’s a big step in making Facebook more useful and for gathering more data to fuel the search engine. It also shows the limitations of “Like” as the primary attribute for evaluating people, places and things.

Graph Search can help discover shared likes and connections, but at a more granular level, the search engine doesn’t go very deep. For example, you can search for movies that your friends or a subset of friends like, but you can’t search for movies rated by your friends with a specific number of star recommendations or for movies your friends liked that are just released in theaters. The same goes for restaurants. You can search for friends by city who liked Chinese food or a particular restaurant, or for Chinese restaurants in San Francisco liked by Culinary Institute of America graduates. But you can’t easily get beyond the “Like” to more granular results. A search for Chinese restaurants in San Francisco liked by friends yields a list of results with an average star rating recommendation from all Facebook users, but surfacing any viewable recommendations takes some extra clicks.

Searching for restaurants with attributes, such as a number of stars to recommend a restaurant designated by Facebook users, isn’t yet part of Graph Search. (Facebook screenshot)

Facebook plans to add Open Graph data from feeds and apps to Graph Search, which will allow for more varied natural language queries, using verbs such as”watch,” “listen” and “play.” In addition, Facebook could add more structured information, such as movies currently in theaters by zip code, collected from third-parties to facilitate smarter answers. Yelp’s location and ratings data, for example, could be useful if Facebook were to allow the data to be integrated into Graph Search.

When asked following the January 15, 2013 launch of Graph Search if there were a major breakthrough needed to make it successful, engineering head Lars Rasmussen said, “We are past the point where there is a big binary, where we solve a problem and magic will happen. We have laid the foundation for a new paradigm, now we need to built it out.” He added, “We have years and years of work to do.”

That much is evident from the current release but with over a billion users pouring more and more granular data into Facebook servers, the limitations of the binary and pervasive ‘Like’ will eventually be overcome.